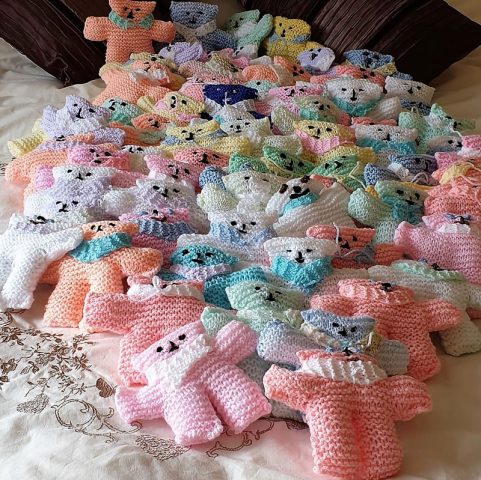 The world is truly divided and troubled right now and wherever you look the news is stark. So we are bringing you this truly uplifting human story to give you some hope. 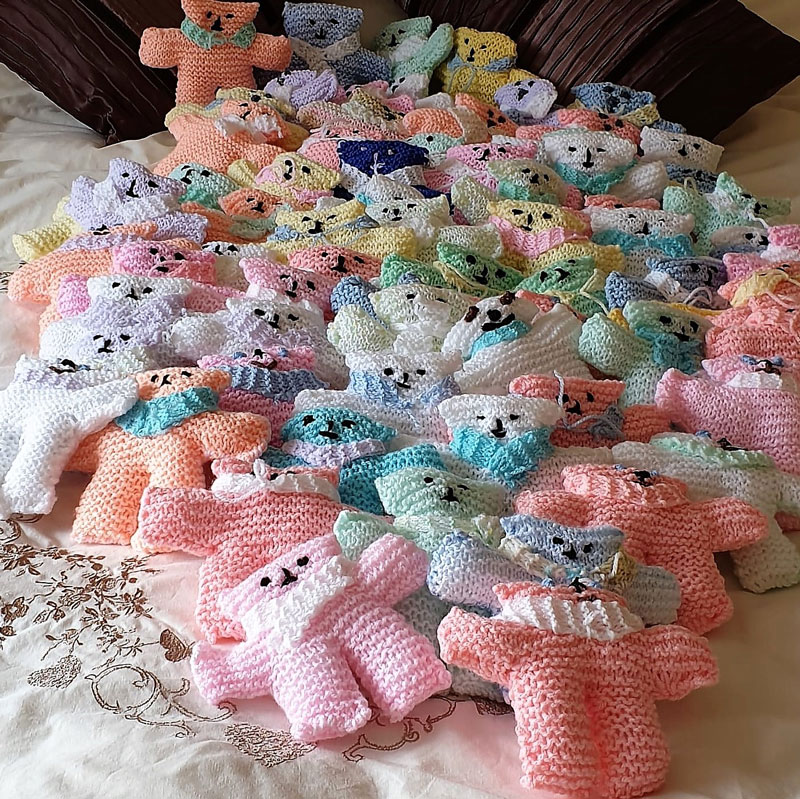 It’s what we really need right now and is an opportunity to recognise some community champions. In Chigwell, Essex a wonderful lady has been knitting beautiful teddy bears which then travel to Pinner to be given faces. Merrill Dresner from Pinner Synagogue has told us the background to this wonderful project. In her own words:

Lily Gentzler was a member of the Westcliff Community at the time my mum was living there (in the 80s, 90s and early 20s) and was involved in a knitting group that my mum (Fay Sober) set up.

Along with many other ladies, they produced teddies and other toys to send to Israel via Emunah, and also to other places.  We (the family) used to travel to Israel with bears in our suitcases so that we could deliver them ourselves!

Lily now lives in Chigwell near her family. Her lovely husband Jack was housebound for many years and she looked after him alone until his death two years ago. Lily just continued to knit these bears. I visited occasionally, originally to take my mum with me so that they could chat, but now as my mum is in a care home with dementia, I visit alone.

On many occasions, I come away with bags of bears, or challah rolls made to my mum’s original recipe, which Lily continued to bake every Thursday, and still does so. I think you could say she is a big fan of my mum!

Although Lily can knit the bears she is unable to embroider the faces, so the knitting group in Pinner, which my mum used to belong to as well, continues to sew the faces. So, thanks to a combination of people doing various tasks, the teddies are able to be personally delivered to children in Belarus, which would give all the ladies involved immense pleasure. I think they came to The Together Plan through a combination of my mum knowing about you (Debra Brunner), and also work being done by Pinner ladies.

The bears, complete with faces, have now been delivered to The Together Plan’s warehouse by Suzanne Goodman, a member of Pinner Synagogue and coordinator of the Together Plan Aid Together Project. From there the bears will travel by road across Europe to Belarus and will be distributed to children in Jewish and non-Jewish communities across the country. We will follow the progress of the bears as they travel on their exciting adventure to new lands. Follow them on The Together Plan’s Facebook page, as they set off on November 13th.

All that’s left is to say an enormous thank you to Lily Gentzler, Merrill Dresner, Suzanne Goodman and the wonderful knitting group at Pinner Synagogue for this amazing hard work that has made this donation possible. You are all heroes and I think Fay Sober would be truly proud! It just shows what we can do together.