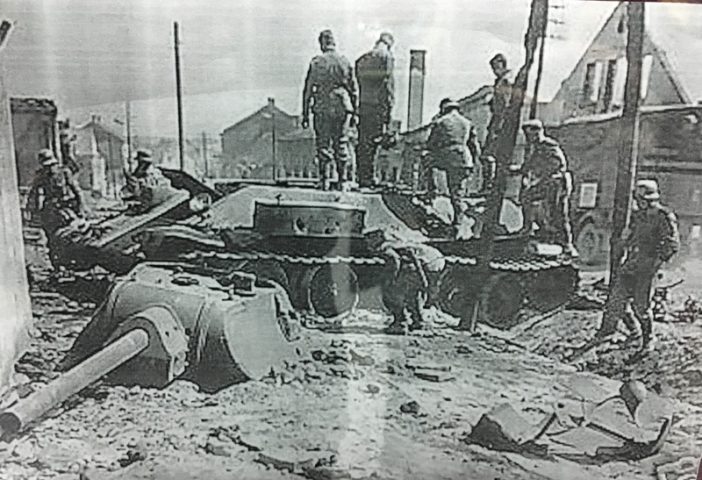 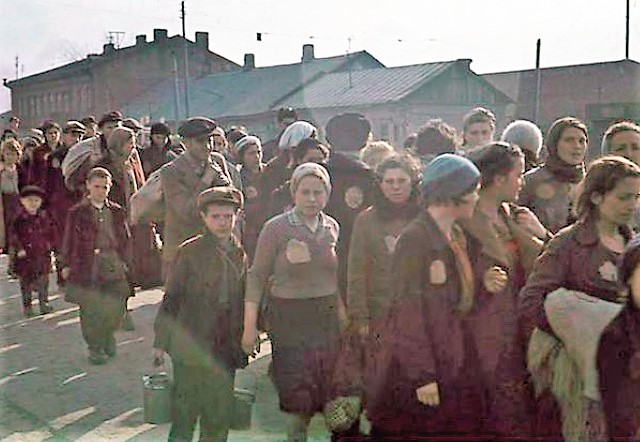 How do we even begin to try to understand the Holocaust in its entirety? The full story from beginning to end. In truth, ‘the Holocaust’ for most people conjures images of the death camps and concentration camps of Poland and Auschwitz-Birkenau, the focus of Hitler’s Final Solution. Film footage, photographs, survivor testimonies and eyewitness accounts from the liberating forces in Poland, ensure that these places will never be forgotten. But what of the atrocities where no liberating ever reached and where hardly anyone survived? What about the citizens of the Soviet Union, who did return from camps, hiding places, the forests, and never told of their suffering or losses because to do so risked persecution or incarceration? What of the lands between Poland and Moscow, that battleground and its people; the places no-one talks of, because no-one knows what happened there. Auschwitz was the final solution which in itself tells us there had been other solutions. What were they and why don’t we learn about them?

Timothy Snyder’s masterpiece of a book, Bloodlands, is a part of the fascinating rethinking of Eastern Europe under Hitler and Stalin, and opens up a catastrophic landscape.’ (New Statesman Books of the Year). In the coming weeks, The Together Plan will serialise one harrowing chapter from the book ‘Holocaust and Revenge’. This is the story of Belarus between 1941 and 43. This is vital history that the world hasn’t yet talked about which, simply put, absolutely blunts the senses. We have broken this chapter down into bite-size blogs, to give you, the reader, time to process. Please share. Become an educator. Bring this to the attention of others, and even better read ‘Bloodlands’ for the bigger picture.

The Together Plan is building a Jewish Cultural Heritage Trail through Belarus, giving voice to people in the country so that they can tell this story themselves because now they can. Our aim is to put Jewish Belarus back on the world map, where it will start to find its place in Holocaust education curricula globally because you can’t learn the lessons from the past until you tell the whole story from beginning to end.

Timothy Snyder is the Housum Professor of History at Yale University. Bloodlands received the Hannah Arendt Prize, the Leipzig Book Prize for European Understanding and the literature award of the American Academy of Arts and Letters. Snyder is a frequent contributor to the New York Review of Books and the Times Literary Supplement and a former contributing editor at the New Republic. He is a member of the Committee on Conscience of the United States Holocaust Memorial Museum, a permanent fellow of the Institute for Human Sciences, and site on the advisory council of the Yivo Institute for Jewish Research.

Belarus was the center of the confrontation between Nazi Germany and the Soviet Union. After the German invasion of June 1941, its inhabitants observed, if they survived, the escalation of both German and Soviet violence. Their homeland was a German zone of occupation and a once and future Soviet republic. Its cities were battlefields of armies in advance and retreat, its towns centers of Jewish settlement destroyed by the Holocaust. Its fields became German prisoner-of-war camps, where Soviet soldiers starved in the tens and hundreds of thousands. In its forests Soviet partisans and German policemen and Waffen-SS conducted ferocious partisan warfare. The country as a whole was the site of a symbolic competition between Hitler and Stalin, represented not only by soldiers behind the lines, partisans in the forests, and policemen over pits but by propagandists in Berlin and Moscow and Minsk, the republic’s capital city.

Minsk was a centerpiece of Nazi destructiveness. The German air force had bombed the city into submission on 24th June 1941; the Wehmacht had to wait for the fires to die down before entering. By the end of July the Germans had shot thousands of educated people and confined the Jews to the northwest of the city. Minsk would have a ghetto, and concentration camps, and prisoner-of-war camps, and killing sites. Finally Minsk was transformed by the Germans into a kind of macabre theater, in which they could act out the ersatz victory of killing Jews.

In Minsk in Autumn 1941, the Germans were celebrating an imaginary triumph, even as Moscow held fast. On 7th November, the anniversary of the Bolshevik Revolution, the Germans organized something more dramatic than mere mass shootings. On that morning, they rounded up thousands of Jews from the ghetto. The Germans forced the Jews to wear their best clothes, as though they were dressing up for the Soviet holiday. Then the Germans formed the captives into columns, gave them Soviet flags, and ordered them to sing revolutionary songs. People had to smile for the cameras that were filming the scene. Once beyond Minsk, these 6624 Jews were taken in trucks to a former NKVD warehouse in the nearby village of Tuchinka. Jewish men returning that evening from forced labor assignments found their entire families gone. As one recalled: “Out of eight people – my wife, my three children, my elderly mother, and her two children – not a soul remained!”

Terror itself was nothing new. People had been taken from Minsk to Tuchinka, in the black ravens of the NKVD, not so long before, in 1937 and 1938. Yet even at the height of Stalin’s Great Terror of those years, the NKVD was always discreet, taking people by ones and twos in the dark of night. The Germans were carrying out a mass action in the middle of the day, made for public consumption, ripe with meaning, suitable for a propaganda film. The staged parade was supposed to prove the Nazi claim that communists were Jews and Jews were communists. It followed from this, to the Nazi way of thinking, that their removal not only secured the rear area of Army Group Center but was also a kind of victory in itself. Yet this hollow expression of triumph seemed designed to disguise a more obvious defeat. By 7th November 1941, Army Group Center was supposed to have taken Moscow, and had not.

Stalin was still in the Soviet capital, and was organizing his own victory celebrations. He had never abandoned the city, not during the initial offensive of Operation Typhoon of October. Lenin’s embalmed corpse was sent away from the Kremlin for safekeeping, but Stalin remained and ruled. Leningrad was besieged, and Minsk and Kiev were taken, but Moscow defended itself under Stalin’s obstinate command. On the 6th of November, Stalin spoke defiantly to Soviet citizens. Noting that the Germans called their campaign a ‘war of annihilation,’ he promised them the same. He referred, for the one and only time, to the German’s murder of the Jews. In calling the Nazi regime an empire eager to organize ‘progroms,’ however, he fell far short of a true description of the ongoing mass murder. The Minsk Jews taken to Tuchinka on 7th November (the Soviet holiday) were shot on 9th November (the National Socialist holiday). Five thousand more followed on 20th November. Traditional empires had never done anything like this to Jews. On any given day in the second half of 1940, the Germans shot more Jews than had been killed by pogroms in the entire history of the Russian Empire.

The German murder of Jews was never going to play much of a role in the Soviet vision of the war. From the Stalinist perspective, it was not the killing of Jews that mattered but the possibilities for its political interpretation. The German identification of Jews with communism was not just a Nazi conviction and a pretext for mass murder it was also a propaganda weapon against the Soviet Union. If the Soviet Union was nothing more than a Jewish empire, then surely (went the Nazi argument) the vast majority of Soviet citizens had no reason to defend it. In November 1941 Stalin was thus preparing an ideological as well as a military defense of the Soviet Union. The Soviet Union was not a state of the Jews, as the Nazis claimed; it was a state of the Soviet people, first among whom were the Russians. On the 7th November, as the Jews marched from Minsk to their deaths, Stalin reviewed a military parade in Moscow. To raise the spirits of his Soviet peoples and to communicate his confidence to the Germans, he had actually recalled Red Army divisions from their defensive positions west of Moscow, and had them march through its boulevards. In his address that day he called upon the Soviet people to follow the example of their ‘great ancestors’ mentioning six pre-revolutionary martial heroes – all of them Russians. At a time of desperation, the Soviet leader appealed to Russian nationalism.

Stalin was associating himself and his people with the earlier Russian Empire, which just one day before he had mentioned in connection with pogroms of Jews. As the General Secretary of the Communust Party of the Soviet Union summoned the heroes of pre-revolutionary Russian history, he had to negotiate with their ghosts. By placing Russians at the center of history, he was implicitly reducing the role of other Soviet peoples, including those who suffered more than Russians from the German occupation. If this was a ‘Great Patriotic War,’ as Stalin’s close associate Viacheslav Molotov had said on the day of the German invasion, what was the fatherland? Russia, or the Soviet Union? If the conflict was a war of Russian self-defense, what to make of the German mass murder of the Jews?

Hitler’s public anti-Semitism had placed Stalin, like all the leaders of the Allies, in a profound dilemma. Hitler said that the Allies were fighting for the Jews, and so (fearing that their populations might agree) the Allies had to insist that they were fighting to liberate oppressed nations (but not Jews in particular). Stalin’s answer to Hitler’s propaganda shaped the history of the Soviet Union for as long as it existed: all of the victims of German killing policies were ‘Soviet citizens,’ but the greatest of the Soviet nations was the Russians. One of his chief propagandists, Aleksandr Shcherbakov, clarified the line in January 1952: “the Russian people – the first among equals in the USSR’s family of peoples – are bearing the main burden of the struggle with the German occupiers.” By the time Scherbakov uttered those words, the Germans had killed a million Jews east of the Molotov-Ribbentrop line, including some 190,000 Jews in Belarus.

A link to BLOODLANDS, CHAPTER 7 – part two will be available shortly.