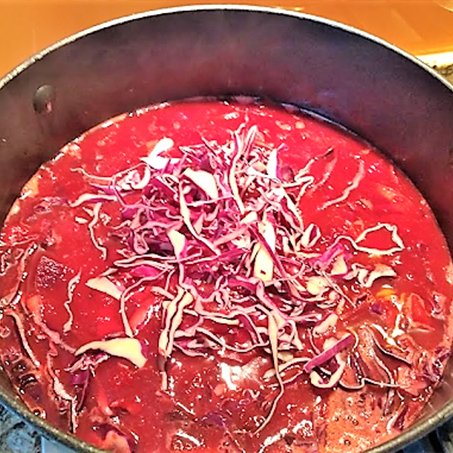 A bit of history…

It may never be known who first thought of using beet sour to flavour borscht, which also gave the soup its now-familiar red colour. Jerzy Samuel Bandtkie‘s Polish-German dictionary published in 1806 was the first to define barszcz as a tart soup made from pickled beetroots. The fact that certain 19th-century Russian and Polish cookbooks, such as Handbook of the Experienced Russian Housewife (1842) by Yekaterina Avdeyeva and The Lithuanian Cook (1854) by Wincenta Zawadzka, refer to beetroot-based borscht as “Little Russian borscht (where “Little Russian” is a term used at the time for ethnic Ukrainians under imperial Russian rule) suggests that this innovation took place in what is now Ukraine, whose soils and climate are particularly well suited to beet cultivation. Ukrainian legends, probably of 19th-century origin, attribute the invention of beetroot borscht either to Zaporozhian Cossacks, serving in the Polish army, on their way to break the siege of Vienna in 1683, or to Don Cossacks, serving in the Russian army, while laying siege to Azov in 1695.

Spanish conquistadors brought potatoes and tomatoes from the Americas to Europe in the 16th century, but these vegetables only became commonly grown and consumed in Eastern Europe in the 19th century. Eventually, both became staples of the peasant diet and essential ingredients of Ukrainian and Russian borscht. Potatoes replaced turnips in borscht recipes, and tomatoes – fresh, canned or paste – took over from beet sour as the source of tartness. The turnip is rarely found in modern recipes, and even then, together with potatoes. In Ukraine, beet sour and tomatoes were both used for some time until the latter ultimately prevailed during the last third of the 19th century.

Mass migration from the Russian Empire to North America – initially mostly by members of persecuted religious minorities – was instrumental in bringing borscht across the Atlantic. The earliest waves of migration occurred at a time when cabbage-based borscht was still the dominant variant of the soup in at least parts of Russia. The Mennonites, who began arriving in Canada and the United States from Russia’s Volga region in the 1870s, still eschew beetroots in their borscht; instead, Mennonite varieties include Komst Borscht (with cabbage or sauerkraut) and Somma Borscht (sorrel-based “summer borscht”). According to the Jewish Encyclopedia published in 1906, cabbage-based kraut borscht was also more popular than the beet-based variant in American Jewish cuisine at the time. Subsequent Jewish immigration helped popularize the red borscht in America.

In the 1930s, when most American hotels refused to accept Jewish guests due to widespread anti-Semitism, New York Jews began flocking to Jewish-owned resorts in the Catskill Mountains for their summer vacations. The area grew into a major centre of Jewish entertainment, with restaurants offering all-you-can-eat Ashkenazi Jewish fare, including copious amounts of borscht. Grossinger’s, one of the largest resorts, served borscht throughout the day, every day of the year. The region became known, initially in derision, as the “Borscht Belt“, reinforcing the popular association between borscht and American Jewish culture. As most visitors arrived in the summertime, the borscht was typically served cold.

Here’s our recipe by Michelle Rose our in-house foodie:

Heat the oil and soften the onion, carrot and celery for 5 minutes.

Then add the potato and garlic and beetroot and cook for another 5 minutes.

Add the stock and season with salt and pepper.

Bring the soup to the boil, cover and simmer for about 15-20 minutes until all the vegetables are soft.

With a blender, blitz for a couple of minutes until there are still visual lumps, but the soup has thickened.

Add the tomatoes and cabbage and simmer for another 15-20 minutes.

Serve immediately or cool and keep in the fridge for 2-5 days.