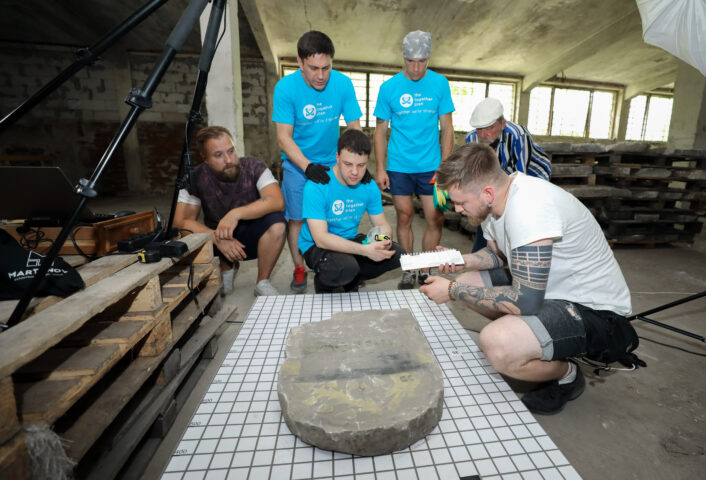 In June 2021 – we announced that we had secured an exclusive agreement with the Brest Municipality to build a memorial at the site of the Brest-Litovsk Jewish cemetery in the south of Belarus. Today the site of the cemetery is a sports ground, there are no gravestones and there is nothing to state that the site was once a Jewish cemetery. Over 1200 remnants of the gravestones that once stood in the cemetery have been discovered across the region and are now in a storage facility outside of the city of Brest. Last summer, Phase One of the project was initiated. The aim was to photograph every piece and this was completed successfully. It was grueling and physically challenging work  – lifting and setting 1200 pieces for photographing. The work was done at the height of the summer and the temperatures were searingly high. Our small and dedicated team worked tirelessly and was successful in capturing every photograph as hoped and within the allotted time. 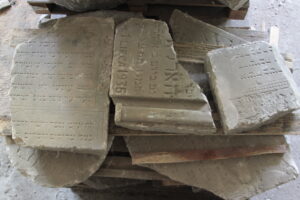 Headstones from the Brest-Litovsk Jewish cemetery

Phase Two of the project was to pass the images to specialists, to read and translate the Hebrew. Everything that could be read was translated and this information is now available and can be found here. Additionally – this database will also soon be available on  Europeana – Europe’s Digital Cultural Heritage Collection.

We have now moved to Phase Three of the project – which is the design stage to create a concept for a memorial using the headstones, that will be installed on territory that used to be part of the cemetery. The designer is located in Los Angeles and the design work is now underway. This is an east meets west international project requiring cross border collaboration across three countries, which will see the unveiling of a significant memorial in June 2024 to mark this important Jewish heritage site that was at risk of being lost to the Jewish world.

Some significant Jewish facts about Brest:

The city of Brest, was the birthplace of Menchem Begin. 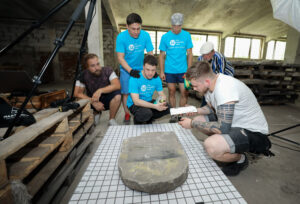 Organized Zionist activity began in Brest in 1884, with the founding of the Bene Tsiyon (Children of Zion) association, and later with a branch of the Zionist movement. In the 1920s and 1930s, this activity intensified, and with it immigration to the Land of Israel. An elaborate Jewish educational system also operated in Brest during the interwar period, including a large Talmud Torah, a yeshiva, ḥadarim metukanim, schools belonging to the Tarbut, Yavneh, and Beys Yankev networks, a Teḥiyah school, a Taḥkemoni Hebrew gymnasium, a Yiddish-language school, an ORT-sponsored vocational school, an orphanage, and libraries. Jewish Brest also boasted an active cultural life, sports clubs, and several Yiddish newspapers, such as Polesyer shtime (Voice of Polesie), Brisker vokhenblat (Brisk Weekly), and Brisker togblat (Brisk Daily). Religious life revolved around the approximately 40 synagogues and study halls located throughout the town. (YIVO) Click here for more information.

The Soloveitchik dynasty of rabbinic scholars and their students originated the Brisker method of Talmudic study, which is embraced by their followers in the Brisk yeshivas. It is so called because of the Soloveitchiks’ origin in the town of Brisk, or Brest-Litovsk, located in what is now Belarus. Many of the first Soloveitchik rabbis were the official rabbis of Brisk, and each in turn was known as “the Brisker Rov”. Today, Brisk refers to several yeshivas in Israel and the United States founded by members of the Soloveitchik family. Click here for more information.

For all of the articles relating to this project to date – please click here.

To support this project, if your family came from Brest or to find out more, please contact us.