Eighty Years on in Brest 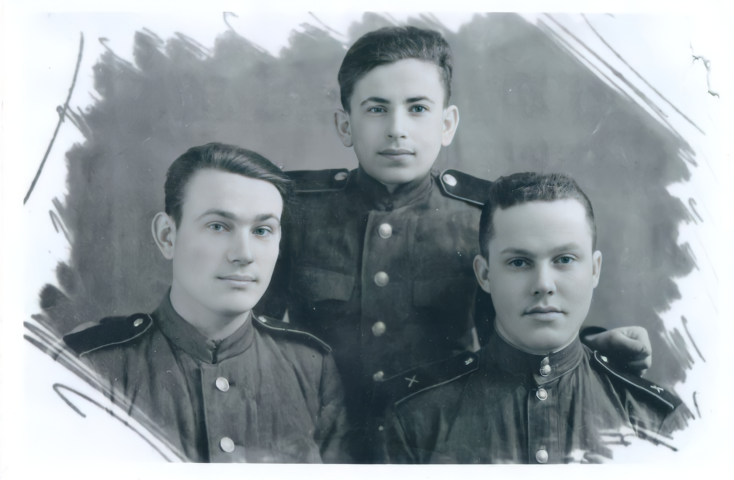 This October marks the 80th anniversary of the liquidation of the Brest Ghetto. Brest, once a part of Poland, and located in the south of Belarus has significant Jewish history going back to the fourteenth century. Before the war the Brest Jewish community numbered almost 30,000. The German army occupied Brest in June 1941 accompanied by the Einzatsgruppen Nazi death squads who played an integral role in murdering Jews in the Soviet Union mostly by mass shooting. After the war – it is estimated that less than 20 of the Brest Jews had survived. Among the survivors was Jack Grynberg with his parents, Fania and Solomon. The building that Solomon built still stands in Brest, and the pharmacy that operated in that building where Fanya worked as a pharmacist before 1941, is still there today.

On Monday October 24th, Artur Livshyts, our Country Director, travelled from Minsk to Brest along with the Chairman of the Belarus Jewish Union, for a special commemoration ceremony to mark this very important and auspicious aniversary. Today in Brest there is a small but active Jewish community, and in other parts of Belarus and around the world there are people with connections to Jewish pre-war Brest.

Boris Bachkovsky is a member of our Together Plan team in Belarus. He lives in Minsk and this 80th anniversary is of great importance for him. Most of Boris’s relatives were killed in the Brest Ghetto. Here he shares an excerpt from his memoire:

The Last of the Colony Warburg.

My father, Isaac Bachkovsky (Isar) was born in 1934 (1932) in Brest-Litovsk, in the Warburg Colony. Then it was Poland. In 1939 it came under the control of the Soviet Union and under the Soviet power the address was changed to ‘Minsk Lane’. Our relatives had lived in this colony since its  foundation in 1922. According to his father’s memories (those of his grandfather), he was born into a religious family with many children, where all the rules of Jewish life were strictly observed. On Saturdays, a Belarusian woman would visit them to light the oven and they ate on special separate dishes that day – the day of Shabbat. My great-grandfather, Abram Bachkovsky, was a tailor and some of our  relatives worked for him. My grandfather, Borukh Bachkovsky, worked in Brest as a loading porter and in the colony he had his own small stable where he kept a horse. My grandmother, Sara Bachkovskaya, had no profession and she brought up the children. Many relatives also lived in Brest. The fate of many of them is still unknown.

With the advent of the Soviet power in 1939, my grandfather got a job with the railway. On June 22 1941, when Germany invaded the Soviet Union, my father, along with his older brother Mikhail (born in 1930), were at a pioneer camp (summer camp) outside the city. The pioneer camp was by the railway and with them were other children whose parents were railway executives, naturally Party leaders. The Germans captured the city and began to drive the children out of the camps into the forests far from Brest. According to my father and his brother, they recall that they had an adult man with them who had a gun. For seven days they made their way towards Baranovichi and then somewhere they met a train with wagons which waited for them. They were repeatedly bombed along the way, but thankfully they managed to escape German-captured territory because they were sent to Mordovia, to an orphanage. That’s how they survived. All my other relatives were killed. Many were in the ghetto, and the young men including my grandfather were just killed in the early days. They could not resist the new authorities and they could not protect their families. Today, my father and his brother are no longer alive. R. S/ In 1944, his older brother Mikhail, at the age of 14, fled to the front and became the son of a regiment. There is a picture of Uncle Mikhail. My father died aged 88 and as far as I know, he was the last Jew born in the Warburg colony who managed to survive the war. 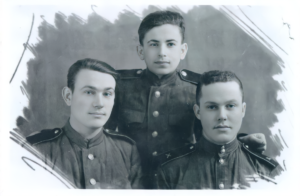 From an interview with ‘Kazakh Edition’ with Mikhail Bachkovsky, Isaac’s brother:

“I was born in 1931 or so I thought. When the papers about my deceased family were found, the documents showed that I was actually born in 1930. We lived in Brest – grandfather, grandmother, mother, father and four children, I was the oldest. Only my brother Isaac and I survived. Isaac was two years younger than me. The rest of our relatives, including brother Izzy born in 1939 and newborn sister Rosa, born in 1941 – all died in the ghetto. We were saved by a miracle, because in May 41, our parents sent us to a pioneer camp (summer camp) in Baranovichi. On June 22, the war began. No-one [from the Jewish community] was left alive in Brest. The pioneer camp that we had been at belonged to the Belarusian Railway, and so a train took us all to Mordovia, to the city of Ardatov. Only one car came to evacuate all of us. Trains were continuously being bombed. Children ran out and hid under the trees. We got into the orphanage not knowing anything about the fate of our relatives and all we knew was that there was a war.

In 1944, I reached the age where I had to leave the orphanage – but where was I to go? I could not go home and there were no relatives to go to. I went to work in an orphanage – to carry water on a horse, for which I received food. At the same time, in 1944, shortly before the victory, my brother was adopted by a family from Minsk. This family’s only son had died. My brother went with them, but he did not change his name. I was left all by myself, but I decided to look for my brother anyway. The orphanage had children who had relatives living in Minsk. They gave me the address, I collected pieces of bread and stuffed beets into a pillowcase and set off. I travelled on the roofs of wagons and on passing trains and I finally reached Minsk. I found myself standing at the train station, not knowing what to do, crying out of resentment, where was I to go? I didn’t even know Russian then, only Polish and Yiddish. A military patrol came and took me to the address that I had been given. There, I lived with the relatives of my orphanage friends for about a week. I never did find my brother.Then one day the military came to visit the house where I was staying. They questioned me and took me to their military unit. What were they to do with me – I was illiterate and I couldn’t do the Suvorovsky school program, but Commander Colonel Pushkin decided to enroll me as a pupil as the son of the regiment. They discovered that I had a musical ear and so I got into a musical troupe. I served in the emergency service for eight years at the Minsk Artillery Preparatory School, based in Gomel. I played in a brass band and learned almost every instrument except the clarinet and flute. Later I had many professions, but my connection to music never faded.

And then I finally found my brother. I was playing on a stage in Minsk, and I saw someone running towards me!!! We were reunited! Isaac lived in a shoemaker’s family, but later he studied at the institute, became a hydromeliorator engineer, and taught at the university.

I left the army when the school was transferred to Krasnoyarsk. There are a lot of musicians there, but I had a family and by then I had an apartment. We stayed in Gomel initially, and then I went to Kazakhstan with my wife. I had no relatives anymore other than my brother, and my wife Tatiana’s father lived in Jetysai at that time, where he was sent to master the Hungry Steppe (a desert region in Kazakhstan). That’s where we were headed. There I worked as a gas welder. At the age of 55, I retired due to harmful work and joined the Philharmonic. There they had a brass band and jazz. My father had been a religious man and I might have followed in his footsteps but fate delivered a different path. I like it in Kazakhstan, the climate suits us here, we have made many friends. I really want the traditions of friendship of Hebrew in our country to develop. And most importantly, that there will always be peace! “

One of The Together Plan’s very significant heritage projects is located in Brest – the memorial at the site of the Brest-Litovsk Jewish cemetery which is an ongoing project, due to be completed in 2024. It is our hope that through this project and the development of the Jewish Cultural Heritage Route – opportunities for the Brest Jewish community will develop and grow. Most certainly – through this work – the community are reconnecting to their lost history and heritage.

Stephen Grynberg, who  lives in Los Angeles, sent this message to be read in Brest this week:

My father Jack Grynberg was one of the last survivors if not the last survivor of the Brest Ghetto. He passed away a year ago and with him in mind I am sending, from my whole family, our appreciation to all of those gathered here today to remember the lives of the Jews of Brest who were murdered in the ghetto

So many members of our family, both Grynbergs and Yakubovskys, were murdered both in the ghetto and at Bronna Gora. By a mixture of tenacity and luck, my father Jack and his parents Solomon and Fania escaped the ghetto and lived. As a result we are dedicated to never forgetting those that were lost, preserving the memory of the Jews of Brest and for fighting antisemitism in all its forms around the world

If your family came from Brest – we would be delighted to hear from you to tell you more about the community and the work we are doing in the region. Please email us at contact@thetogetherplan.com 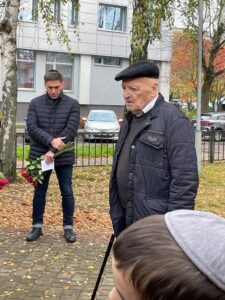 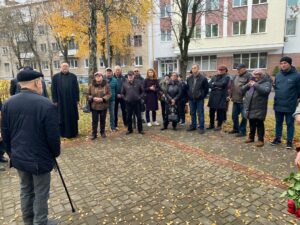 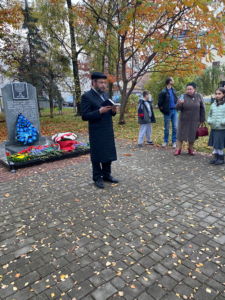