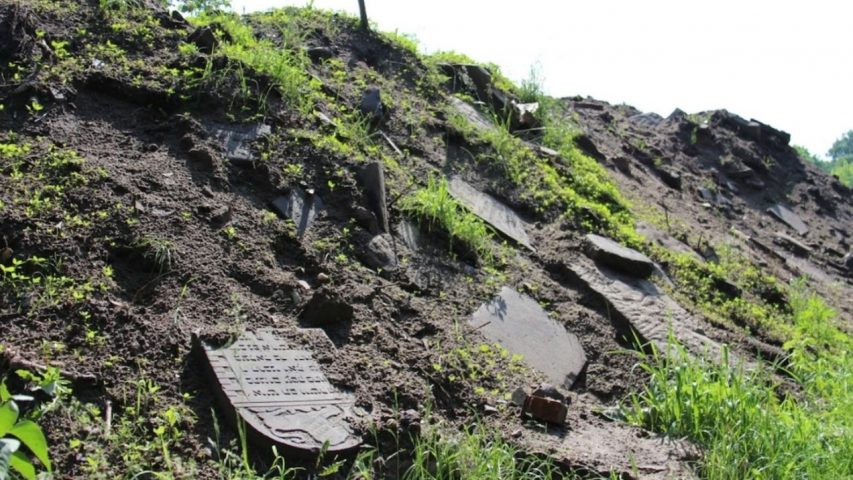 They were “recycled” to build houses, roads and gardens in Brest, Belarus.

Tombstones piled up in Brest-Litovsk Fortress

Back in May, construction work for a new supermarket began in the centre of Brest, a city in Belarus on the border with Poland. In a turn of events that wouldn’t seem out of place in a horror film, over 450 Jewish gravestones have since been discovered in the foundations of the houses that have been demolished to make way for the store.

Central Brest was once home to The Warburg Colony, a housing estate that was built to accommodate Jewish orphans after the First World War. When the Nazis arrived in 1941 the Brest Jews became victims of the Holocaust; ghettoised, moved to camps and killed.

After the war, with Brest’s Jewish community devastated, the Communists set about getting rid of the remnants of Jewish culture in the town. In 1959 they dismantled the Jewish cemetery – one of the oldest and largest in Belarus – and turned it into a sports stadium. As the dismantling process got underway, Communist Party members, along with enterprising locals, recognised the high quality of the headstones and “recycled them”. As well as in the foundations of houses, these Jewish graves have since been discovered in the makeup of Brest’s road surfaces, pavements and gardens.

Tombstones at the site of the new supermarket

In May, with diggers churning up the ground to build a new supermarket, more recycled headstones started popping up. Debra Brunner, co-director of The Together Plan, a UK-based charity supporting community empowerment in Eastern Europe and the Former Soviet Union, told me, “I can’t even begin to explain what it felt like to actually stand among the graves. Picture a huge mound of freshly dug mud with Jewish headstones coming out at all angles. It was a macabre sight.”

It would be impossible to restore the headstones to the cemetery they were stolen from, as the original site is still a sports complex and the particular location of each stone is unknown. At the moment, due to a lack of space and resources, many of the headstones are lying in a pile by the 19th century Brest-Litovsk Fortress, an important Soviet Second World War monument. It is feared that opportunists will try and make money off the back of these rediscovered headstones, by conning unsuspecting visitors to the Fortress into making “charitable donations” towards a fictitious “memorial fund”. In their present condition the stones are vulnerable to the weather and to the whims of the public, as they remain freely accessible to passers by.

A digger on the site of the new supermarket

Minsk-based Artur Livshyts, who heads up The Together Plan in Belarus, said that the reaction in Brest to the morbid finds, “is mostly a positive one”. He said, “The Jewish community care deeply that the stones come to rest in a place dedicated as a memorial, and the wider non-Jewish community generally show concern and really do care for these stones too. Even the builders on the supermarket site stopped work to move the stones to one side and took the time to alert the Jewish community.”

1,500 headstones have been found in Brest over the past six years, with the rate of discovery escalating since work on the supermarket began. The graves are being found on an almost daily basis now, and often as many as five men are required to excavate a single one. According to Brunner the stones are “rough to touch but some are in really good condition considering what they have been through.”

Brunner told me about her recent trip to Belarus and how “minutes” after arriving she “received a phone call from a local man”. This man told her about a farmer who, earlier that day, had been digging in a field in order to erect a new fence and had come across a gravestone lying face down in the ground. He lifted it out of the earth and wiped it down, before quickly realising that the stone’s inscription was in Hebrew”, she said.

Tombstones piled up in Brest-Litovsk Fortress

“We went to collect it in a van and moved it to a safe storage site. The members of the Brest Jewish community who came to help us unload the headstone were deeply concerned about the welfare of the stone – the delicacy and care of the unloading process showed us how much it meant to them.”

Belarusian native Regina Simonenko is the go-to woman when a new headstone is discovered. Head of the Holocaust Centre in Brest, Simonenko arranges the pick-up driver every time there is a new find. “Each headstone tells a story”, she told me. “One headstone was found in the garden of a village house. It had been used to grind flour and a hole had been worked into it over the years. Another grave we found recently was dedicated to a woman named Golda. It was badly damaged and the dates of her life were missing, but there were clear tracings of gold in the engraving of her name.”

Simonenko and The Together Plan hope to create a memorial out of the headstones “so they won’t be used for anything else in the future”, or at least to construct a protective fence to secure the graves preserved by the Fortress. So far, The Together Plan has managed to pay for 400 headstones to be carefully relocated. But until more money is raised, the ultimate fate of the stones remains unclear.

This article was originally published on Vice – Read the article.