Jewish Rechitsa – these stories need to be told 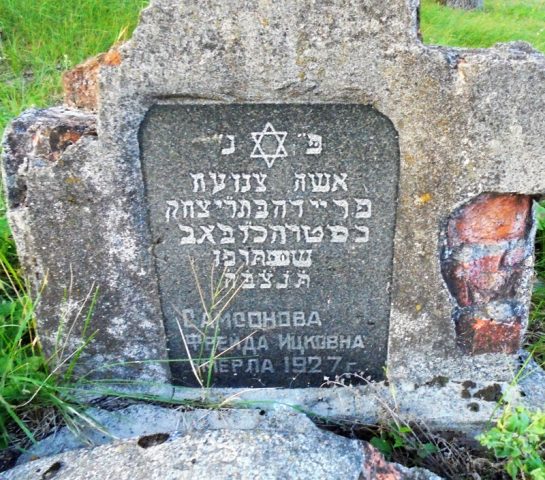 My interest for places that formed part of the Soviet Union was ignited when I got the opportunity to start working in the Baltic states in the mid-1990s as a consultant working on projects about strategic and urban planning as those countries started their journey towards accession to the EU. The first thing that I realised was that I knew nothing about this part of the world that had been hidden from our “Western” eyes behind an iron curtain for 50 years. Numerous other projects followed in the Baltic states, as well as other countries such as Poland and Slovakia, and my interest gradually increased about this mystical place called Belarus. My collection of books and maps about the history of the region grew rapidly and I realised how little we in the west know about the slaughter and suffering that occurred in the Great Patriotic War and the Holocaust in this part of the world.

The journey led me to visit Belarus as a tourist for the first time in 2014, spending 5 days in Minsk and visiting the usual war related sites including the Great Patriotic War Museum in Minsk, the Stalin Line and the Mound of Glory. Luckily and after doing a lot of research about local guides, we found a great guide who had a vast knowledge about Jewish heritage sites in Belarus and she took us to two of the places that made the greatest impression on me. The Pit monument dedicated to the victims of the Holocaust and a site of one of the largest mass murders of Jews in Minsk, and Maly Trostenets, the site of a Nazi extermination site. I obviously knew about the Holocaust, mainly about Auschwitz through school, and I had visited many sites of slaughter in Poland including the Warsaw Ghetto, Treblinka, Sobibor and of course Auschwitz. But Belarus remained mysterious because it was more difficult to travel to and because there is little published in English about the tragedies that befell this country which remains a mystery to many in Western Europe.

The first visit only increased my fascination with Belarus and to cut a long story short I started to volunteer for a UK based charity called Chernobyl Children’s Project (UK) who send teams of volunteers each summer to work with kids in institutions in the Gomel Region. The first year I volunteered with the kids at Ptich, a holiday camp in Kapatkievicy close to Mazyr. The site was beautiful but isolated although the volunteers did have one free day to visit Mazyr so I ended up having to pay a lot of excess baggage on the journey home due to the number of books I found in an excellent book shop there. In subsequent years I have always been with a team of volunteers working with kids in institutions in Rechitsa, which I much preferred as in Rechitsa the volunteers live together in a rented apartment in the town and we are free to explore and live among the locals.

I knew that Rechitsa had one of the oldest Jewish communities in Belarus, which was at the heart of the Pale of Settlement, dating back to the time of the Grand Duchy of Lithuania in the 17th century and even earlier. I had done a fair bit of research about Jewish heritage in the town before my first visit, primarily based on the excellent book “Kaganovitch, A. (2013), The Long Life and Swift Death of Jewish Rechitsa: a community in Belarus 1625-2000” as well as a bit of internet research. 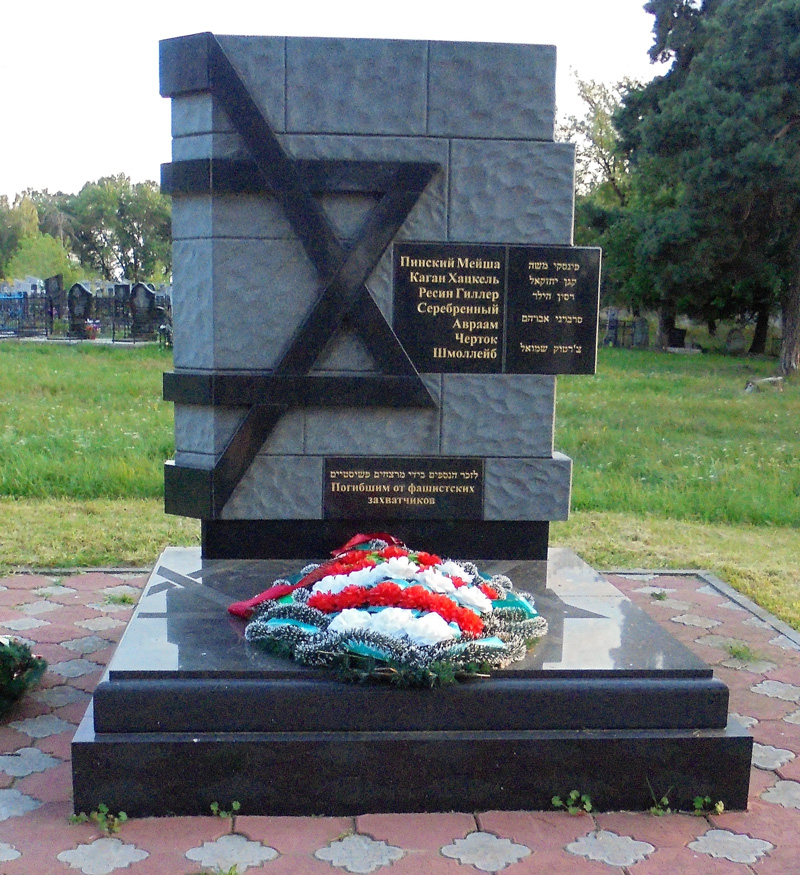 The Kaganovitch book informed me about the varying degrees of persecution suffered by the Jewish community under different regimes throughout this long history. Fortunately, the Nazi’s occupied Rechitsa later than they occupied many other parts of the country, providing an opportunity for those who had the means to leave to do so before the Death Squads arrived, the ones who couldn’t or wouldn’t leave weren’t so lucky. Many of those who moved east before the Nazis arrived and managed to survive the War returned afterwards only to find their homes and belongings had been appropriated by locals who were not particularly keen to return them to their rightful owners. The returning Jews appear to have received little support in reclaiming their property from the Soviet authorities and as a result, this long-standing Jewish community has dwindled to virtually nothing, with many emigrating to the USA and Israel in the 1950s and 1960s. The remaining community in the town with Jewish heritage is invisible in the modern town, a product not only of the Holocaust but of Soviet national policy that robbed the Jews of their specific identity in the post-war years and their specific suffering during the horrific years of the Holocaust in the East. I found no evidence of the several pre-war synagogues in the town.

From my research, I learnt that a ghetto was established on a site on the corner of Sovietskaya and Frunze Street. My favourite way of exploring a town when I first visit is through running, although running is probably the wrong word! I run for a few meters and then stop to take photographs of interesting sites I see along the way. On searching for the site of the Rechitsa ghetto I found nothing remaining of the buildings from that time. According to my internet research, there is a memorial stone in Frunze Street to the memory of those who were murdered, although like many such memorials in Belarus it apparently referred to Soviet citizens rather than specifically identifying Jews as the ones who were murdered. Unfortunately, despite covering every inch of Frunze Street I could not locate the memorial. I am a strong believer in the value of local knowledge and asked many locals about the location of the stone but none of the locals I met had any knowledge of where I could find it. 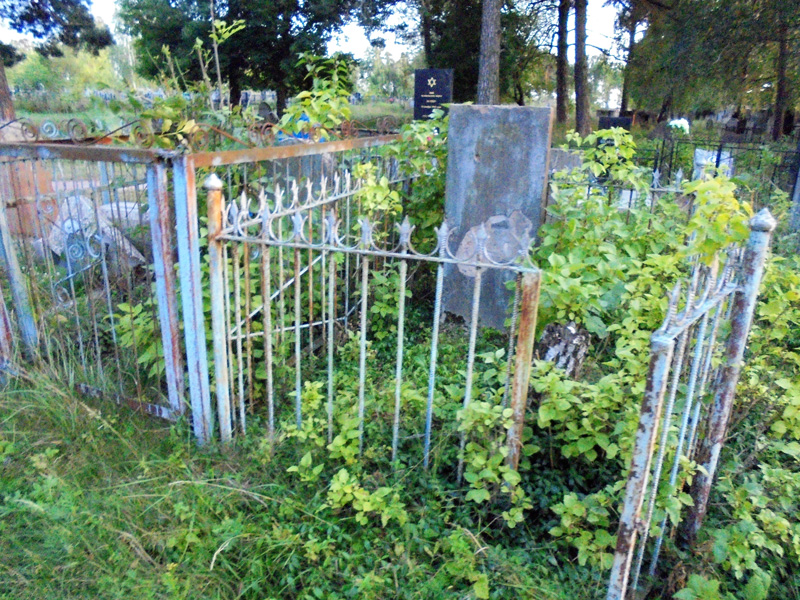 There are also apparently two memorials located only meters apart on the road towards Ozerschina village, where a column of Jews were murdered, but once again despite running the length of the road between Rechitsa and the village several times, I could not find any trace of them. I had more success locating the large Jewish Cemetery on Proletarski Drive, which has two memorial stones to those who were murdered in the Holocaust. Both were funded by the families of people who perished and bear the names of some of those unfortunate souls, and one has the harrowing inscription “To the 3000 who died. For what?”

The Jewish Cemetery is somewhat neglected and many of the headstones have been subject to periodic vandalism. The 2 memorial stones are well maintained as are some of the graves, with fresh flowers and generally obvious signs of regular maintenance present during my visit. The contrast with the overgrown and generally neglected appearance of much of the cemetery was striking and started me thinking that there remains a possibly small community with Jewish heritage in Rechitsa, but that many had left. The dates of the headstones were also interesting. I spent about 3 hours exploring the cemetery fighting my way through the undergrowth and was rewarded with some fascinating finds and some highly decorative headstones. Some of the headstones were from the 18th and 19th century and there were many from the 1950s and 1960s, presumably families who returned once the Nazi hordes had been driven out. The lack of a visible contemporary Jewish community in Rechitsa is reflected in the neglected state of the Cemetery, which now serves as a meeting place for the neighbourhood youth drinking and generally socialising.

The visit to the cemetery and material I have found since then (particularly the incredibly detailed article “Jewish addresses in Rechitsa” written by Leonid Smilovistsky from the Diaspora Research Institute in Tel Aviv), created more questions than answers for me. I am not Jewish so maybe I am naïve and just guessing about the Jewish heritage of Rechitsa, but the visit had a big influence on me. Each grave represents a person, a son, a daughter, a mother, a father and grandparents. Each one has a story. There is clear evidence of a long-standing Jewish community in Rechitsa. Who were those who survived the war? What is their story? Did they stay in Rechitsa? Did they return after the war? Who looks after the graves that are cared for? Where are families of those graves that are neglected? Did they die in the Holocaust? Did they move towards the East in advance of the Nazis? If they survived, have they emigrated? How big is the remaining invisible community with Jewish heritage in Rechitsa?

I sense that this is a story that will resonate throughout many parts of the former Soviet Union and it is a story that has ignited my passion to return to Rechitsa and explore further and I understand that there are rich sources of information in the Rechitsa Museum of Regional Studies and State Archives. These stories need to be told.