Making a change at age 8, one picture at a time 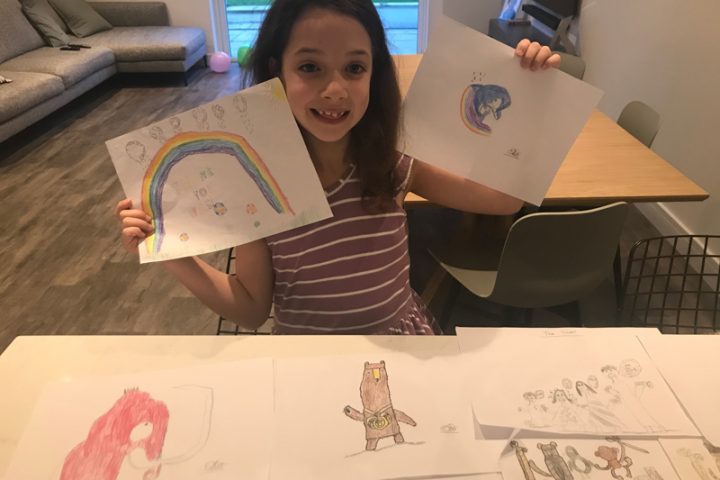 A very excited eight-year-old called Olivia pops up onto my computer screen and without hesitation starts an impassioned, in-depth description of every aspect of the drawing she is showing me.

Now, this is not a family zoom call or one of my friends’ children showing me what they have done today.  This is a purposeful call to Olivia, to talk about her drawings.  The question is, why would I, an adult with no apparent connection to this child, be making this call?

Olivia has made a very important decision and is acting on it.  Olivia has decided to become a budding entrepreneur drawing pictures.  The key difference, whilst she should be commended for starting her own business venture she has decided instead of keeping her newly acquired money for herself, will be donating it all to charity.  Olivia told me  ‘It was a very difficult decision, to pick which charity to give to as there are so many fascinating charities that all do wonderful work and it took a long time and a lot of thought’.  However, after hearing about The Together Plan’s ‘Making History Together’ programme, from her grandmother, Gillian Gruder, a volunteer at The Together Plan, her decision was made.

The programme is for Bar/Bat Mitzvah aged children in the UK and non-Jewish teenagers in Belarus. This new programme gives an opportunity for the next generation to play a role in bringing to life an important piece of Jewish history that few know about. In Belarus, there is no Holocaust education at all and around the globe, very few people know about the lives of the Belarusian Jews. This is vital Jewish history and the aim is to bring it to life through the eyes of young ‘History Makers’. Participants will explore their own stories, and think about how they have been shaped by history. They will be encouraged to ask questions such as: “Why does history matter?”, “What can we learn from our history?” and “Why did the world forget about the Jews of Belarus?”  Olivia, unfortunately too young and so not able to be part of this project realised, ‘more people need to know what happened to the people that went ‘missing’ and many Belarusians who live there today don’t even know what happened.’ She refers here to the Jewish population who were imprisoned in the Minsk Ghetto during World War II.

Hidden away in a secret place that not even mummy knows about, Olivia is keeping safe all the money she has raised so far.  I, feeling very flattered, have been given the privilege of being shown not only where she has kept the money which is still a secret so I can not divulge, but also how much she has made so far.  With four pictures under her belt, Olivia has raised £42.  But that is not enough, there are more pictures and more family members on the horizon who she plans to approach, and Olivia has set herself a goal to raise £200 for The Together Plan.  Once that target has been reached it does not end, as she wants to continue to raise money for another as yet undecided charity.  For now, Olivia is mainly keeping this charitable venture under her hat and the recipients are all family, but the numbers are growing.  Soon, family members will not be enough and the decision of expanding to friends and neighbours has already been decided.

This is a child with a deep desire to help others, with an absolute sense of purpose, understanding that she has the ability to bring about change.  Here is a little girl who is thinking of others, thinking how she would feel if she needed help and someone was there thinking of her, wanting to help and how that would make her feel.  Here is a little girl sitting at a table with a colouring pencil in her hand thinking what pretty picture she could make that someone will cherish.  This level of altruism is rare to find, but especially from someone so young, and it is inspiring.  Race, religion, age, gender or physical ability are not even considerations.  She is far more concerned with the quality of her artwork.  Very firmly Olivia explains ‘you need to set about a time when you are free to make a picture.  You can not just rush it and make a picture of a few squiggly lines and expect someone to buy it for charity, you need to sit down and create something someone will cherish.’

All of this has been achieved with a smile on her face and a very proud mummy sitting by her side. Who knows where this will go, who knows how many more children she can inspire to create with purpose? How many more grandparents will be adding their grandchildren’s creations to their home and paying for it! Olivia, the budding entrepreneur has already inspired others, which so far includes her younger brother Alex.  Disagreements started from the onset with different visions.  Alex wanted to keep half the money he made for himself and donate the other half, but after great discussion and arms flailing, Alex has relented and has just sold his first piece.  Alex’s medium of choice is lego.

Olivia is young, with a quiet tenacity, who has already understood the benefit of giving to others and is enjoying the sense of accomplishment and purpose she has received in return.  It is a great stepping stone for anyone to start realising what they can give to the world rather than the other way around.  There is certainly a bright future ahead for Olivia, and her inspiring story reminds us all that whoever we are, we can all play our part in making the world a better place. Click here to hear it in Olivia’s own words. To make a donation and support Olivia in reaching her goal – please go to her fundraising page. In return – she will send you one of her masterpieces in grateful acknowledgement.

If you have been inspired by this story and want to get involved please contact us.