In 1936-37, Stalin’s Great Purge saw half a million Soviet citizens executed, many of them Jews who had been falsely accused of treason and anti-Soviet activity. Fearing any threat to his power, Stalin executed many, even though previously some had been his friends and allies. 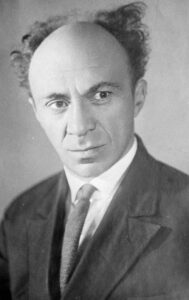 Jewish culture was disappearing, though one man managed to bypass the initial repressions and became an important figure in Soviet Jewry. His name was Solomon Mikhoels. Born in 1890, in modern-day Latvia, Mikhoels established the Moscow State Jewish Theatre where he was an actor and later director for many years. The performances were in Yiddish, where Mikhoels played leads such as Tevye the Milkman (later popularised in Fiddler on the Roof) and King Lear in the Yiddish translations of Shakespeare.

During the 1930s, Mikhoels was in danger during the Great Purges, though he managed to avoid being arrested, tried and executed like so many other Soviet Jews. Soon after Germany invaded the Soviet Union (Operation Barbarossa) in 1941, Mikhoels hosted a gathering in a Moscow park, rallying Jews in the international community to raise funds for the Soviet war effort against the Germans. Thousands attended the event, and Mikhoels later became the chairman of the Jewish Anti-Fascist Committee.

Mikhoels travelled around the world meeting with Jews from many countries and asking them to support the Soviet war effort against Nazi Germany. He achieved fame in the global community, meeting with famous internationally-known Jews like scientist Albert Einstein, artist Marc Chagall, and world-famous silent film actor Charlie Chaplin. Mikhoels was getting the support Stalin needed and his efforts raised millions of dollars for the Red Army. Mikhoels was involved with creating The Black Book and was arguably the first individual in the Soviet media to publicly speak about the mass murder of Jews.

After the war, Stalin feared Mikhoels, and considered him to be too popular and a threat. A show trial convicting Mikhoels of treason would not have been accepted as he was so well known and well loved. Stalin decided to find another way. The Soviet secret police killed Mikhoels in 1948, while he was in Minsk.

Mikhoels’ death was staged as an accident so that no suspicions would be raised. The Moscow State Jewish Theatre was closed and all the members of the Jewish Anti-Fascist Committee were arrested… only two survived the purges before Stalin’s death in 1953.

While Stalin’s regime did not devise a systematic ethnic cleansing machine like the Germans did, Stalin targeted Jews before and after the war. His regime arrested, tortured and executed Jewish doctors, poets and activists in the late 1940s/early 50s, under the pretense that they were traitors and spies during the Cold War against the West. It was during this time that the publication of The Black Book, a collection of stories by Soviet Holocaust survivors recounting their suffering as Jews during the war, was not allowed to be published. This was part of the silencing process of Soviet Holocaust survivors. Though it has been denied by the Soviet regime after Stalin, there have been hints at a plan where the Stalin regime was going to deport all Soviet Jews to camps in the East, where they likely would have been exterminated, as the Germans did. This plan did not come to fruition, as Stalin died before it could happen.