In times when antisemitism tore the world apart, there were still glimmers of hope in humanity. There is the story of the village of Porechye, when an entire village saved dozens of Jewish children who managed to escape from the Minsk Ghetto. They hid them for the entirety of the war, yet this incredible story of heroism fell into obscurity.

There are other stories of people in Belarus helping Jews survive the war. Stories that have been suppressed by the Soviet government because it would have put Jews, who could not tell their stories of suffering, into a separate category. It would defy the Soviet narrative that all citizens suffered equally.

Here are three summaries of stories of people working together to help their fellow man. Stories of bringing the world together. 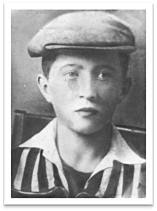 Vladimir (Volik) Rubezhin – 1941
From: We Remember Lest the World Forget – Memories of the Minsk Ghetto

When the Germans invaded Belarus, many people joined the Red Army to resist and defend their country. Some chose to fight the invaders by joining or establishing partisan brigades in the forests. These units became instrumental in driving the Germans back towards the West, out of the Soviet Union and defeating them. Some Belarusians were too young to join the Red Army and instead helped the partisans in the forests.

This is the story of 13-year old Vladimir “Volik” Rubezhin. When the war broke out, Volik was at summer pioneer camp* and returned to his home in Minsk only to find it empty, with a message from his mother saying she and his sister had fled, and that his father had joined the Army. He lived alone at home for a month before he was forced into the Minsk Ghetto in August 1941. In the ghetto, he proved himself helpful and reliable, and caught the attention of leaders of the ghetto underground movement.

One of those leaders was Hersh Smolar. Smolar saw that despite being only thirteen years old, Volik acted like an adult and was therefore treated like one. Volik started attending secret meetings between ghetto underground leaders, passing along messages from one end of the ghetto to another. If he were betrayed to the Germans, not only would Volik have been shot but the entire resistance movement would have been destroyed. The fate of hundreds of Jews was in the hands of a 13-year old boy. Eventually, the resistance movement started leading people out of the ghetto to the nearby partisan brigade camped in the forest. The partisans needed supplies, and Volik was one of the people able to sneak in and out of the ghetto transporting supplies, and leading people to the partisans. Throughout his time in the ghetto, Volik led 50 people out and transported weapons, medicine and other supplies to the partisans.

In 1943, the German authorities became aware of Volik’s role and started searching for him in the ghetto. Fortunately, one day before their search, Volik was warned and managed to escape. In the partisan unit, he was known as the teenager who behaved with the “fortitude of a man” and was presented with a special rifle, cut down for his height. He participated in raids against Germans, throwing grenades at vehicles and destroying seven convoys throughout his time as a partisan. Hersh Smolar praised Volik in his book The Ghetto Avengers, saying that the boy was a communication agent, a spy and a bomber. Volik was only 17 years old when the war ended.

Volik’s story shows that anyone, no matter how old they were, could join the fight against evil and prove themselves a worthy fighter. A teenager went from being a pioneer at a summer camp to a life-saving partisan scout in a matter of weeks, because he had the desire not only to survive, but also to save as many lives as he could.

*Every Soviet child would spend their summer in a pioneer camp, where they would learn what is means to be a good communist 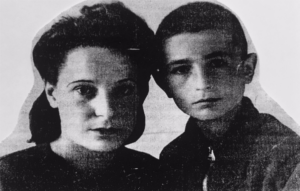 Nadejda Andreyevna Solovyova (Nadya) and
Leonid Grigoryevich Ruderman (Lyonya)
From: We Remember Lest the World Forget – Memories of the Minsk Ghetto

There are stories across Europe of non-Jews hiding Jewish families for money. But there were also people who hid Jewish children because of the good in their heart. This is the story of Nadya Solovyova, a non-Jewish woman who lived on the outskirts of the Minsk Ghetto and helped a child survive during the war. People who escaped from the ghetto sometimes came to Nadya’s house to hide for a few days, telling her about the horrible things that were going on there.

One day a woman named Liza came to Nadya’s house and begged Nadya to take in a 2-year old child named Lyonya and protect him. Liza knew she would die in the ghetto and was prepared to do anything to protect her son. Nadya knew that if she were caught harbouring a Jewish boy she would be shot, but she chose to save Lyonya nonetheless.

A few days after Nadya took the boy in, there were pogroms in the ghetto. Liza was killed. The Germans searched house by house in the ghetto and nearby houses to catch the people hiding Jews, so Nadya took Lyonya to the woods to be with her mother’s relative, a woodsman. Lyonya was later returned to Minsk, where he was hidden in the cellar, only coming out at night so he could breathe fresh air. After the war, Nadya went to search for Lyonya’s father, a soldier in the Red Army, only to learn that he too had died. Nadya’s family adopted Lyonya, brought him up and told him about his parents. Most importantly, they told him he was Jewish, they preserved his Judaism for him. He had no recollection of Liza or his father because he was too young to remember them. The only memory he had of them was two letters by Liza, and a photograph. Here is an excerpt from a letter written by Liza to her husband Grisha, Lyonya’s father:

I write you this letter at the time when I must separate from my only happiness, our son. I took this step because I want to save his life at least. My life is lived, and now every minute is spent waiting for death. Death is not frightening to me, because I am dying with the knowledge that maybe you will return. Maybe you will meet our son, and together you will remember me. I have left Lyonya with the Russian family, Krezo. They have promised me that they will raise him as their own. If you return, I ask you to show them enormous gratitude, and also to raise our son well. Liza 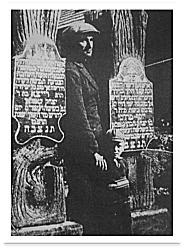 Ura Kaplan with his father
From: We Remember Lest the World Forget – Memories of the Minsk Ghetto

Ura Kaplan was just 16 years old when the Nazis attacked Belarus. He lived in a town called Novy Sverzhen, south of Minsk, which was part of Poland before 1939. He grew up speaking Yiddish, Polish and Byelorussian, and was fortunate enough to be friends with his family’s neighbours of all ethnicities. When the Germans invaded Novy Sverzhen, they set up a ghetto where many Jews from surrounding areas were forced to move, including Ura’s family.

Ura was fortunate and worked in a bakery outside of the ghetto during the day, and was able to sneak bread into the ghetto for his family. In November 1941, Ura came home to find the women, the elderly and children of the ghetto being put on trucks and he himself was thrown onto one the trucks along with his mother. They all knew they were being taken to their death, and so Ura’s mother told him to jump. Ura jumped off the speeding truck, and by some miracle he managed to run into the woods, avoiding the flying bullets from the German soldiers firing at him. He escaped while those on the trucks were shot that day. His mother, his sister, grandmother, his cousin Ida….Ura only had his father left.

Ura found his way to the sawmill where his father, along with the rest of the healthy adult men were working. Together they continued to live in the ghetto until January 1943, when partisans stole into the ghetto to warn them that the Germans were planning on killing the rest of the ghetto inhabitants. They cut the barbed wire at night and 200 people escaped into the woods. Most of them, however, turned back because they were scared of the cold and starvation. All of those who returned were executed a few days later. Ura’s father, instead of going to the partisans, went into a village where he had contacts. Unfortunately he was betrayed to the Germans and he was executed. Ura lost his last family member. Of the 200 who escaped the ghetto that day, only eight (including Ura) survived.

Ura was in a partisan brigade for the rest of the war, blowing up railway lines, ambushing German convoys, and derailing trains. He was treated with dignity and respect, having proven himself useful in combat. One day, Ura and his fellow fighters had to go into a village to steal food from farmers who collaborated with the Germans. They found a rich Polish farmer who, upon seeing that they were about to take his livestock, said “Please don’t touch me, I’m hiding a Jewish woman!” Suspecting an ambush, Ura told him to show them the Jewish woman. The farmer took them to a barn where a woman came out of the hiding place, only for Ura to find his cousin Ida! He thought she had been killed along with the rest of the family, but somehow she had survived. She eventually joined Ura’s partisan unit as a cook and survived the war. Ura was just 20 years old when the war ended, but lived through and survived the most traumatic events known to mankind. He thought he lost his entire family, but by mere chance he found and saved the only family he had left.

These three stories are just a few of the many we are still uncovering today. We need to solidify these in history while we still can – while those who lived to tell their stories are still alive. These stories are historical evidence that in all the darkness of the Holocaust, there was still light to be found in people’s hearts. We need to remember this.