I’ve just found out that my dad was a hero 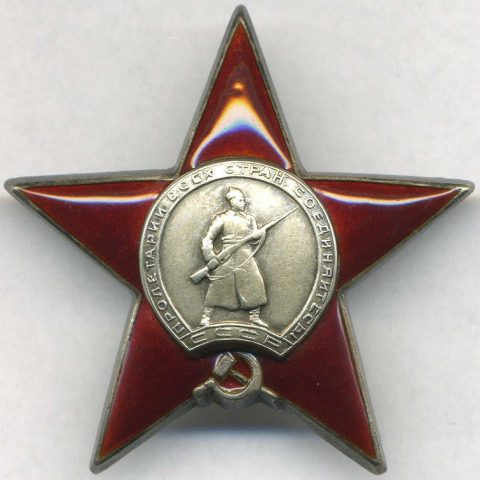 Both my parents were Holocaust survivors from Poland. But, unlike my mother, who talked a lot about her life before and during the Second World War, my father didn’t speak at all about his past. He was a quiet and gentleman and he died in 1973 when I was 25. Up to that time, it had never seemed right to ask him about his past and after then it was too late.

And my mother told me that he had seen the Germans shoot all his family in 1942 but that for some unexplained reason he wasn’t shot and that he had then joined the partisans for a  couple of years and then the Russian army.

That was about all I knew about his background. I didn’t even know about my father’s siblings and have never seen any photos of any of his family, which is still a source of great sadness.  And, apart from one exception that I’ll tell you about in a moment, I have never met anyone else who knew his family.

But he did have two medals, which he gave me, and their pictures are shown below. As you’ll see, one was a very impressive Red Star with an image of a Russian soldier holding a rifle and the other was a flat silvery disk with an image on the front of a tank and three aeroplanes and some writing in Russian which I later found out meant ‘For Courage’.

“To a Partisan of the Patriotic War” (second class)

The medal second class was awarded to partisans, to leaders and organisers of partisan units,  for personal distinction in combat, in the execution of orders and command assignments, for active support of the guerrilla struggle against the Nazi invaders.

“Order of the Red Star”

The Order of the Red Star was given to Red Army and Navy personnel for exceptional service  in the cause of the defence of the Soviet Union in both war and peace.

I never knew what he’d done to earn those medals but I did like them and they became a  family lucky charm, first for my sons and now for my grandsons.

But it kept bugging me that I didn’t know why he’d got those medals.

So, a few years ago, I approached someone I found on the internet who claimed to be able to find out the story behind Russian medals. That got me nowhere when the researcher told me that, to his surprise, the number on the Red Star medal related to Russian soldiers who had been in the partisans and that the Russians had still not opened those records to the public. That seemed bizarre and the end of the road as far as the medals were concerned.

A little while ago I joined a Modern Jewish History course run by Professor Shirli Gilbert of  University College London – a terrific course,  and I decided to ask her if she had any thoughts as to how I might find out more about the medals. She suggested that I contact Professor Polonsky, the pre-eminent scholar on Polish Jewish History, so I emailed him and he very kindly put me in touch with Professor Eliyana Adler at Penn State University who then put me in touch with a Russian academic, Dr Oleg Budnitski at The International Centre for the History and Sociology of World War II and Its Consequences in Moscow.

Dr Budnitski responded very quickly and he came back to tell me the following:

Your father was awarded a medal of Partisan of the Patriotic War of the second degree. [Note: this is a medal that I never knew about and have never seen.]

He served as a private in Chapaev brigade in various partisans’ detachments: Zhukov,  Schors & Ponomarenko from August 1, 1942 till July 20,1944. It was mostly Belorussian,  not a Jewish brigade. Your father took part in attacks on German trains (2 times), on police  station, in destruction of German telephone lines, etc.

He was mobilized to the Red Army then. He served as a translator in the special counter intelligent unit Smersh (abbreviation of Smert’ shpionam – Death to Spies). He was very instrumental in the cleansing of the Red Army rear from the enemy agents in East Prussia in  1945. He saved the life of his commander, who was badly wounded in a battle in February  1945. Your father was awarded a medal “For Courage” for that.

Unfortunately, I have not found information about his Red Star medal in the records of  Russian Ministry of Defence. In any case, your father was an excellent soldier.

I can’t tell you how exciting it was to get this news, even though I’m still left with the mystery of the Red Star medal.

Let me now tell you about the one person I met who knew my father’s family.

A few years ago, I went on a visit to Baranovich to see if I could trace my father’s background.  Whilst there were some records of the street where the family had lived, that street had been destroyed, so there was no possibility of seeing the family home. But it turned out that my grandfather had a brick factory in a small village outside the town, so off we went to the village. We found someone there who vaguely remembered that there had been a brick factory and pointed us in the direction of where they thought it had been. We came to an open field with a few houses and our guide started knocking on the doors but no-one was in. There was one more house left, a bit further away from the others. By then I was ready to give up but our tenacious guide wanted to give it a try. And, would you believe it, there was an old lady at home. And when asked if there had been a brick factory in that area she said ‘Yes’. And when asked where exactly the brick factory had been, she said ‘Here’ pointing around where we standing. As I looked down I could see that there were pieces of brick in the earth, so I picked up part of a brick that, as far as I was concerned, came from my grandfather’s brick factory.

We then asked her if she knew who had owned the brick factory and she said that she didn’t remember but there was an old lady in the village, the teacher, who knew all the history.

So, just like those ‘Where Do You Come From’ television programmes, we went back to the village and, after asking a few people, we were able to find her. She confirmed that the brick factory had, indeed, been owned by a Mr Wolanski, my grandfather. And when we asked her what he was like, she said that he was a good man. It’s difficult to explain the emotion of finding someone who had known what was, up to that point, a mythical person as far as I was concerned and had something good to say about him.

The next part of the conversation wasn’t so good. We asked what had become of him and she said that she thought he’d emigrated to America. We, of course, knew that that was a  long way from the truth and that she also must have known, but wasn’t telling us, that he,  along with the rest of his family, apart from my father, had been murdered by the Germans when they liquidated Baranovich in 1942.

But let me finish with a final word about my father.

He met and married my mother in Poland after the War and they managed to get to England,  with me as a 10-week old baby, in March 1948. They made a life for themselves in London but my father died in Westminster Hospital in 1973 at the age of 58 following an operation to replace a leaking valve in his heart. He’d had rheumatic fever as a child which had damaged his heart and this must have made his strenuous wartime activities even more difficult.

He had been in the hospital for quite a long time before his operation and his name on the medical records was Majer Wolanski. So, every day, the medical team would come in and call out ‘Good morning, Major’, which always made me laugh since I assumed that they assumed that his title had been misspelt on his medical records. Well, now I know that although he wasn’t a Major, my dad was, in fact, much better than that – he was a hero!