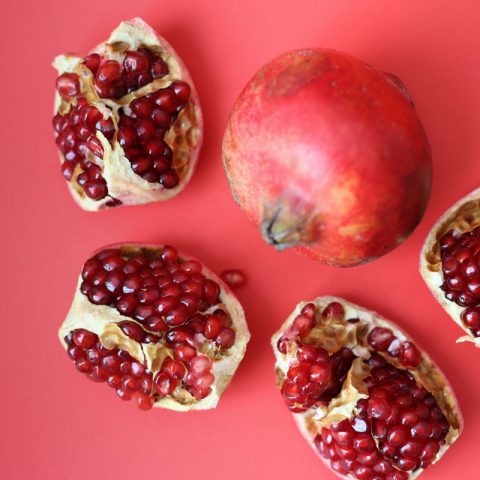 The festival of Rosh Hashanah, the Jewish New Year, is a joyous occasion celebrated by members of the Jewish community all over the world.

The festival consists of many elements, including prayer services in synagogues and the blowing of an ancient musical instrument called a “shofar“, which is made from a ram’s horn. However, one of the most anticipated aspects of Rosh Hashanah is undeniably all of the delicious, sweet foods that Jewish people eat throughout the festival.

During Rosh Hashanah, Jewish people will frequently use the Hebrew greetings: “Shana Tova” or “Shana Tova U’Metukah”  meaning: “A good year” or “A good and sweet year.” To that end, the sweet foods that are eaten during Rosh Hashanah symbolise the hope for a sweet and happy year ahead. Two of the most recognisable food staples to be found on the table during Rosh Hashanah are apples and honey, a tradition that has passed down the generations for centuries.

This is accompanied by a song that is taught to young children at cheder (Jewish Sunday school), which goes: “Dip the apple in the honey, make a brocha [blessing] loud and clear. L’Shana Tova U’Metuka, have a happy sweet New Year.”

In addition to dipping the apple in the honey, Jewish people also frequently eat honey cake, pomegranates and round raisin loaves of challah to see in the New Year.

The dipping of the apple in the honey is one of the most recognisable traditions associated with Rosh Hashanah.

The honey symbolises the excitement for a sweet New Year ahead. It’s believed that centuries ago, the apple was chosen as the fruit that was to be dipped into the honey on Rosh Hashanah due to the symbolic nature of the fruit.

The pomegranate is also a highly symbolic fruit eaten by the Jewish people during the New Year.

The Torah, the Jewish scroll that contains the first five books of the Tanach, consists of 613 “mitzvot”, or commandments. Symbolically it is said that the pomegranate supposedly consists of 613 seeds, which is why it is eaten during Rosh Hashanah. Also, the sweetness of the fruit ties is synonymous with the symbolism of the festival.

Jewish people also eat many other types of fruits during Rosh Hashanah, including dates, lychees and star fruits – all aspirational symbols for a sweet year to come.

Challah is a special Jewish bread that is frequently eaten on Shabbat and during religious festivals.

Throughout the year, challah loaves are usually plaited and adorned with different types of seeds, such as sesame or poppy seeds. However, during Rosh Hashanah, round raisin challah becomes especially popular as opposed to long, plaited variations. The shape signifies that the year is circular, with a beginning and an end, and the raisins symbolise the sweetness of the new year ahead.

It should come as no surprise that honey cake is eaten during Rosh Hashanah, it’s a festival that oozes with sweetness after all.

Many Jewish people who make a honey cake to celebrate the New Year will make batches that they will then give to friends and family to spread love and happiness during the festive occasion. The cake’s ingredients often include cinnamon, ginger and – of course – honey or syrup.

During Shabbat (sabbath), and many Jewish high holy days, people do not cook; instead relying on food made the day before or left in a slow cooker to be eaten when ready. In days gone by, in Eastern Europe and beyond, Jewish people would take their casseroles to the baker to be left in the piping hot ovens overnight before the arrival of Shabbat on a Friday. Traditionally one such dish that would be prepared this way was Cholent. Read the history of this dish and the family recipe of Simon Hassell, one our very own volunteers.

During the Communist years, it was illegal to practice religion. For Jews in the Soviet Union, religious practice was impossible and many traditions were lost. Through the work of The Together Plan we endeavour to help people back to Jewish life, and what better way than through teaching the rituals connected through symbolic foods and sharing recipes.

In Belarus, apple trees can be found in almost every village, for sure the Jewish people who once lived there would have picked them at this time of year for their Rosh Hashanah tables. Undoubtedly some of them will have been planted by Jewish people to bring forth fruit for their festivals and communal meals. Apples are for sure a symbol of memory for many people who have ancestry in the country. Sometimes they can even help people find their way home as in this short film.