The significance of Grivenes in my Belarusian family 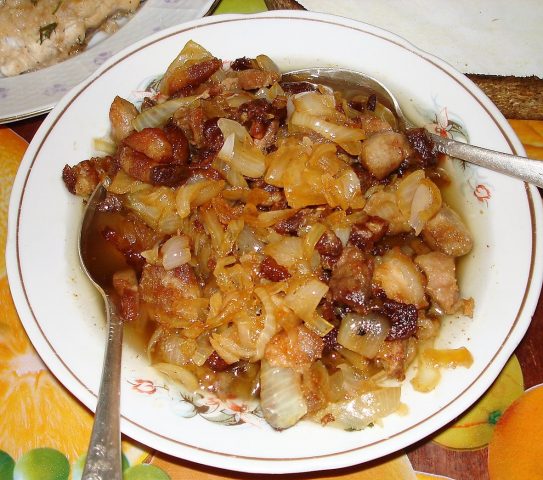 Alexander Biely is a freelance historian (with a PhD in history) and a writer, specialising in the culinary history and anthropology of Belarus and Lithuania, and the complicated history of national identities in this part of the world (in which, he believes, his own mixed identity helps him very much).

He was born in Minsk in 1968 and has spent most of his life in his native country, except for a year in London in the 1990s and half a year in Uzbekistan.

He has an agritourism farmstead some 20 km from the famous Volozhin yeshiva. He consults for Belarusian restaurants and food producers on the history and cultural meaning of Belarusian food.  He occasionally leads nostalgic Jewish tours to various (semi)forgotten shtetls, especially around his favourite Naliboki Forest – a vast, wild, almost primeval forest, between Volozhin and Novogrudok which was the main base of the Jewish partisans during WWII.

Alex loves to refer to himself as the modern re-incarnation of Yankel, a fictitious hero of Pan Tadeusz, a Polish epic poem by Adam Mickiewicz, Jewish inn-keeper and ardent patriot of the Polish-Lithuanian Commonwealth. You can find a statue of Adam Mickiewicz standing tall and resolute in the centre of Novogroduk in Western Belarus.

The following is Alex’s food journey in his own words:

The significance of Grivenes in my Belarusian family

‘Sometimes my wife and I melt the chicken fat and pour it into a jar, together with cracklings, or fried chicken skin, making the so-called  Grivenes.

Chicken fat in our part of the world is an absolutely necessary component for a kosher kitchen, because you can’t fry meat in butter.

In Slavic cuisine, beef liver pate is made with butter, but this cannot be made in Kosher cooking as we cannot mix milk and meat.

My father, having been born to a Jewish mother, was halachically Jewish. However,  being only a quarter Jewish, my brother and I were not extensively educated in the religion, so as not to confuse us and hinder our social integration into Soviet society. However, around 7 years ago I started to learn more about my Jewish heritage and wanted to learn more about the Jewish cuisine of my grandmother and her kin, so Jewish cuisine has become an important part of my life now.

In my distant childhood, more than half a century ago, a funny episode happened in our family.

Grandmother Fruma tried to observe at least the basic elements of kashrut, however difficult it was. She would tell my parents that back in the 1920s  she would make this recipe – chicken skin fried with chopped onions, fried in chicken fat and added to chopped radish.

My mother was frying this type of crackling, without realising that the recipe was specifically Jewish. I was a baby at that time,  crawling on the floor somewhere nearby. I didn’t understand the word “redka” (radish), but I shouted joyfully – “Fedka”! (Fedka – diminutive of Fedor, Theodor). Everyone burst out laughing, but since then in our family, my author’s neologism “Fedka” has firmly stuck to fried chopped onions- no matter what kind of fat it is fried in.

“Fedka” in the early 1970s in the family of a chief engineer and a university teacher of German with two children – not very rich, even by Soviet standards, – was often eaten with buckwheat porridge. This combination was named “Grishka and Fedka”. Grishka is diminutive of Grigory, another popular East Slavonic name, but was applied, ironically, by our family to buckwheat kasha due to the similarity of this name with “grechka” (buckwheat).

So almost half a century ago, without even realizing it, I got deeply involved in culinary anthropology for the first time. However, only when I was writing my first, and so far the only, book in English – Belarusian Cookbook (link) being already 40 by that time, I suddenly realized how much subconscious Jewishness hides in myself, and how much Jewish cuisine, historically, influenced Belarusian cuisine.