A historic moment for the Brest-Litovsk Jewish Cemetery 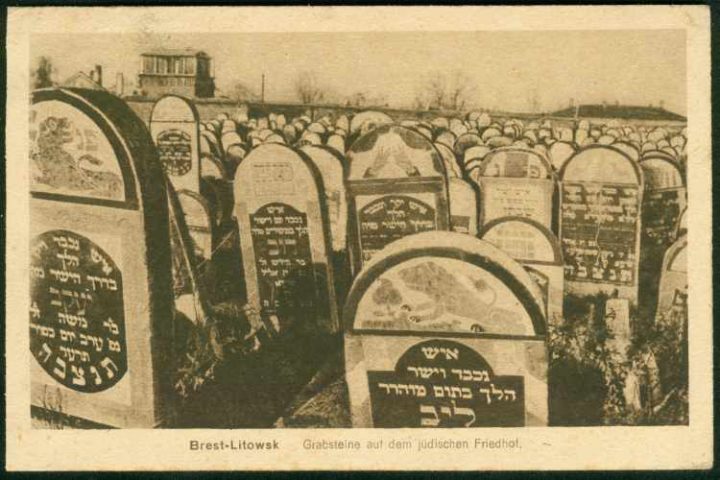 In the summer of 2014, Debra Brunner (The Together Plan’s co-founder and CEO) travelled to Belarus to run the charity’s youth summer programme. During that week, Debra and The Together Plan team spent a day in Brest, to make a short film and find out more about the Jewish headstones that they had been told about, that were surfacing all over the region.

These headstones had once stood at the Brest-Litovsk Cemetery, now the site of the Lokomotiv sports stadium. What had happened to the cemetery? Why was it now a sports field? Why were headstones being discovered and what was going to happen to them? It was a compelling story and we wanted to understand more. We travelled for 10 hours that day to capture the story. Kate Samuelson, one of our Youth for Youth members,  then studying for her masters in journalism, said she would write a story for us.

The 31st October 2014 was a Friday and The Together Plan was then a one-year-old charity. That morning Debra Brunner turned on her phone and received a barrage of emails from an array of newspapers, including the Daily Mail, asking to cover the story that Kate had helped bring to light. ‘VICE’ the online news agency had that day published the story. The headline was ‘The Town Making the Horrifying Discovery That It’s Built Out of Jewish Tombstones.’ That news story went viral reaching people in Israel, the USA, South America and beyond. This was news and it was travelling.

Brest, the birthplace of Menachem Begin and home to 26,000 Jews before World War II,  was part of Poland in the interwar years. When Stalin and Hitler joined forces to seize Poland in the early days of the war, control of Brest fell under the Soviet Union, but Hitler broke the alliance and invaded the Soviet Union, on 22nd June 1941. The German Army attacked without warning. The defence of the Brest Fortress was the first major battle of Operation Barbarossa, the Axis invasion of the Soviet Union. It was the largest invasion force in the history of warfare. The Axis powers (invaded the western Soviet Union along a 2,900-kilometer (1,800 miles) front, with 600,000 motor vehicles and over 600,000 horses for non-combat operations.

Four Einsatzgruppen Nazi killing squads entered the territory of the Soviet Union at the same time, with the sole purpose of killing Jews mostly through shootings into pits and experimentation of murder by gas in mobile gas vans. This was the backdrop to what was soon to come in Western Europe – the establishment of the German concentration camps in Poland designed to kill Jews, Roma, gay people and political prisoners on an industrial scale.

In Brest, the 26,000 strong Jewish community was annihilated and only a handful survived. Up to 1939, Jews had been practising their religion but when the Soviet Union seized control, then as allies with Nazi Germany, Jewish people slowly found themselves less able to practice under the Soviet policies. When Hitler broke the alliance with Stalin and invaded the Soviet Union, the assault on the Jewish community, both living and dead, ensued. The Einsatzgruppen rounded up the Jews, some were shot, some were put into a ghetto from whence they were transported to Bronnaya Gora to be shot. 50,000 Jews from Brest, Kobrin and Pinsk all perished in that place. The Brest-Litovsk Jewish cemetery, the burial place of Rabbi Jacob Meer Padva and Rabbi Josef-Dov Soloveichik, was also a target. To read more about the world of Brisk and its importance to the Jewish world, click here.

Vladimir Gubenko, born in 1932, became known to the public in recent years as an illustrator and author. Hundreds of his pencil drawings, with the documentary precision of an eyewitness, truthfully and eloquently recreate historical events of those dark war years. Vladimir has lived in Brest for nearly 80 years, and although he was forced to flee during the war, he was able to recreate images, some from his own memory and those of others. Thanks to the illustrations now featured in his book Brest of My Memory 30’s – 60’s of the XX Century we know that Cossacks, working with the Nazis, robbed and ransacked the Jewish graves at the Brest-Litovsk Jewish cemetery in 1943.

After the breakdown of the alliance between Hitler and Stalin, the Germans advanced into the Soviet Union and Belarus became a bloody battleground. When the Soviet air raids began, the Germans cleared parts of the Jewish cemetery to install twenty-four-hour sound detectors to be able to track incoming enemy air attacks.

On Minskaya Street (now Pushkinskaya Street) when the Soviet Army joined forces with the allies, they retook Brest including the buildings that the Germans had been using as a POW camp for Soviet soldiers. These houses had once been the territory of the former Jewish Warburg Colony (built by Felix Warburg of the American Jewish Joint Distribution Committee to bring support to the Jewish survivors and orphans – victims of World War 1). These buildings now became prisons for the captured Germans. German POW’s, by order of the Soviet camp commander Major Larin, removed the tombstones from the Jewish cemetery in the autumn of 1945 and used them to pave the land around the houses where the German prisoners were being kept. This was done to improve the sanitary and hygiene conditions in the camp. Later on, the authorities accused the local population of stealing the headstones from the Jewish cemetery.

It was 8 years ago that we at The Together Plan learned of the headstones that were surfacing all over Brest and we made it a priority to work with the local community to find a way to honour the lost communities of the past and tell the story of their suffering. Over the last eight years, we have campaigned tirelessly, and in February of 2020, just before the pandemic hit the world, Debra Brunner and Artur Livshyts returned to Brest to make a film to help build awareness of the project.

With thanks to a number of donors and the support of Stephen Grynberg based in the USA, (the son of one of the few survivors of the 26,000), the project has, at last, got the green light. Last Thursday, 17th June in spite of many challenges, our Country Director Artur Livshyts and the Mayor of Brest, Alexandr Rogachuk signed an exclusive agreement, a truly historic moment.

This means that we can now move the project forward. Every headstone, complete or broken, will be photographed, and where possible read and translated. A lapidarium will be designed and installed on land that was once part of the cemetery which means that a lasting and timeless memorial will finally mark this place of such historic significance. Needless to say, we are delighted and the local community are simply over the moon. Now the work begins.

For more information about this project, please click here.