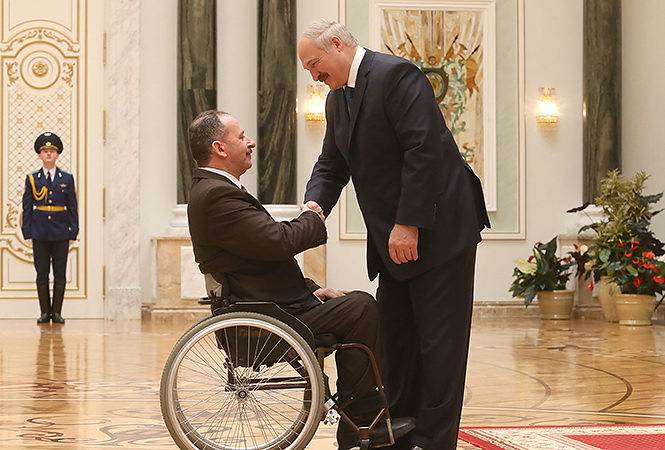 The Together Plan cooperates with a large number of organisations and supports many people in Belarus and we value our acquaintance and friendships with all of them. Yet there are some among them who will leave a bright mark in the history of the charity.

This article is a tribute to one man in particular whose life path can be called nothing short of an act of heroism and bravery. This man saved the life of a woman he had never met on a fateful night in Tumen, Russia 36 years ago when he stopped to help an attack in the street. His interception saved the woman but left him with a life-changing injury; a severed spinal cord which meant he would never walk again. He found the strength to take up life in a wheelchair and faced many challenges and many problems. He resolved to find strength, and the motivation to endure, and today he is a leader in the field of sports for people with special needs. He champions numerous charity events and has spent his life helping other people. His name is in the book of records of Belarus. Indeed, the biography of this man is so rich that almost no year of his life has gone without good deeds and achievements. This is a man with untold strength, he never gives up and has fought all his life to stay away from despair and depression. This is the story of Boris Bochkovskiy.

Our hero is 59 years old, he lives in Minsk and specialises in the rehabilitation of people with disabilities. He teaches at the University of Physical Education and has travelled to many countries. He is an honorary citizen of Pensacola, Florida, USA and has been in a wheelchair for 35 years. Boris is also Jewish. Since 2016, he has been the coordinator of Programs for People with Special Needs for the International Public Charitable Organization ‘Dialog’ in Belarus and is a valued partner of ‘The Together Plan’ in Belarus.

Life before and after

As a young man, Boris served in the army and in 1981 he entered the Belarusian Polytechnical University. During his 3rd year, he travelled to Tyumen, Russia to earn money. All of his relatives had died during the war. His father had grown up in an orphanage and the family had little means. There was no one to help Boris. He had to make his own way and he struggled to earn. One evening in Tyumen, while protecting a girl from a violent attack, he himself was stabbed. The consequences were catastrophic: his spine was damaged leaving  Boris paralysed. He was 23 years old.

Most of Boris’s friends gradually disappeared from his life. Only a few stayed loyal to him and those people still feature in his life today. Boris never expected help from anyone and he never reproached anyone for the lack of support, but Boris not only rose above life’s problems and became a true role model, moreover he devoted his life to helping others.

From psychologist to athlete…

Boris worked hard. He studied to gain a diploma in psychology (graduating from the International Humanitarian Economic Institute). This knowledge helped Boris understand and work through the five stages of grief – denial, anger, compromise, depression and acceptance. After the attack, Boris was not immediately able to fully comprehend what had happened. Doctors offered no optimistic forecasts and they were blunt in their prognosis that he would never live a full and active life. Yet this only spurred this brave 23-year-old on. He became intensely engaged in physical education in order to rehabilitate himself. Three years later he got his driving license and bought a “Zaporozhets”, a small car produced in the USSR, which a disabled person could purchase at half price. In 1988, Boris began to engage in invasport (special needs sports). His determination was extraordinary and in 1992 he became the USSR invasport table tennis champion. In 1996, he developed an interest in wheelchair dancing and since 2003, he has been working on the Rainbow Program where he is engaged in adaptive physical education with people with impaired psycho-physical development in the Jewish Community in Minsk.

Boris has been recognised in Belarus for his achievements at the highest level. In 2015 he was awarded a medal by the Belarusian government, coming 1st place for his work in the field of adaptive sports in the country. In 2017 he won a medal for his work in the field of Paralympics in Belarus, and he was presented with the highest accolade receiving a medal and title of ‘Honoured Worker of Physical Culture’ from President Alexander Lukashenko.

Boris’s achievements in the field of wheelchair dance are nothing short of astounding. He met Olga Teterkina, a student of choreography at the Minsk University of Culture, herself a three-time champion of Belarus. Olga, not disabled, partnered with Boris and together they became world champions. Their dance marathon lasted five years. During this period they became champions of Belarus, winners of the World Cup in Amsterdam, and finalists of the open championships of Germany, Holland, Sweden, and Norway. Their performance in Makuhari, Japan, at the World Championship in Wheelchair Dance Sport was triumphant.

Together we are stronger

Today Boris is happily married. He met his wife Zhanna through sport and they have been married for over 30 years. Zhanna is also wheelchair-bound, as a result of a car accident at the age of 16. Boris and Zhanna are the first married couple in Belarus living independently as wheelchair users. Zhanna is the country’s champion in athletics and table tennis among the disabled community. She has performed successfully in high-speed wheelchair riding and graduated from the Philological Faculty of the Belarus State University with Honors. It proves that power attracts power and multiplies the success.

A world citizen and patriot

Thanks to the development of sports for the disabled, Boris has visited many countries. On many occasions he received offers to relocate to different countries from America to Israel, but he is extremely proud of the fact that he has managed to fulfil his potential in his homeland. Almost all of his relatives lost their lives in Belarus during the war in the ghetto. He knows and values the history of his family and proudly commemorates his ancestors.

One path – one common goal

As a member of the Jewish community of Minsk, collaboration with the British charity “The Together Plan”, was a logical continuation of what was for Boris, a common cause. Becoming a part of The Together Plan turned out to be the beginning of a long story that has helped hundreds of people with special needs to feel supported and valued, to be a part of a bigger programme and to have the opportunity to lead an active lifestyle.  Boris entered a new period in his charitable and sporting life when he found “The Together Plan”.

Boris has led many people from the Belarus special needs community to achieve inspirational success. In 2007, a team from his table tennis program “Rainbow” participated in the special Olympic Games in China (Shanghai) where they won 5 bronze medals. In 2009, the short track team under the guidance of Boris, won 2 gold, 4 silver, 3 bronze medals at the Winter Special Olympics in America (Idaho). It is worth mentioning here that Artur Livshyts (co-founder of The Together Plan) was also part of this programme which enabled special needs competitors to compete overseas.

Boris became the coordinator of programs for people with disabilities of the international public charity organization “Dialog”, partner of British charity “The Together Plan” in 2016.

He says that he has been able to move to a new level of support for the sports movement of the Jewish and non-Jewish communities for disabled people in Minsk only thanks to this cooperation. Thanks to support from Dialog and The Together Plan, monthly sports events have been made possible including; bocce, football, chess, track and field and other activities for different age groups of the community delivering much-needed rehabilitation and education through sport. These events bring people together in a community setting and they are also a lot of fun. No participant goes unnoticed, everyone receives a prize and feels appreciation from Dialog and The Together Plan.

Together we are stronger. Together we can do more and help each other.