The purple beauty – the aubergine 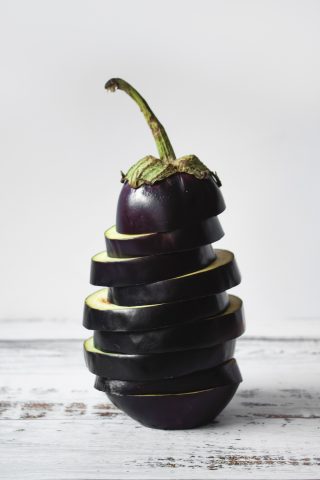 Eggplant is the name for aubergines in the US, Australia, New Zealand, and Canada. It is called aubergine in the UK, Ireland and Quebec. In South Asia and South Africa, it is called brinjal.

It is a plant species in the nightshade family Solanaceae. Solanum melongena is grown worldwide for its edible fruit. Most commonly purple, the spongy, absorbent fruit is used in several cuisines. Typically used as a vegetable in cooking, it is a berry by botanical definition. As a member of the genus Solanum, it is related to the tomato and potato. Like the tomato, its skin and seeds can be eaten, but, like the potato, it is always eaten cooked.

Eggplant is nutritionally low in macronutrient and micronutrient content, but the capability of the fruit to absorb oils and flavours into its flesh through cooking expands its use in the culinary arts. Source: Wikipedia

With all of our recipes, we like to make a connection with Belarus because that’s where our beneficiaries are after all. So here are some fascinating statistics…

If you are travelling through Minsk and want to sample a recommended aubergine speciality, why not go ‘Georgian’ at Khinkalnya Restaurant, Internatsionalnaya 25, Minsk 220030.

Went here 2 nights on the run it was so good. Never had a chance to taste khingali before because I don’t eat meat. Here they do cheese khingali and they were well worth waiting for. The aubergine phali is to die for – had it both nights, the khachapuri and even just the plain flatbread was delicious. – Trip Advisor