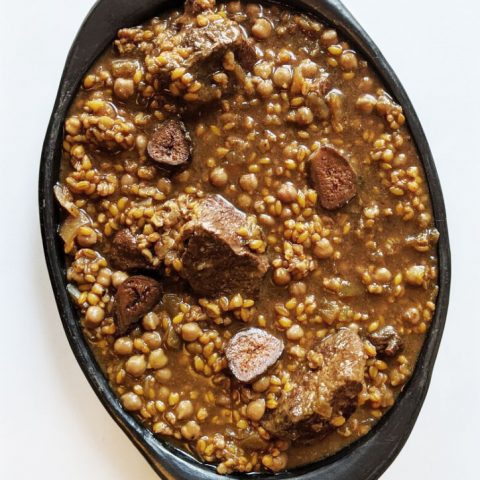 If you have landed on this recipe through our recipe blog then you will know that August 2021 in our recipe series is all about Rosh Hashanah.

If you have found this recipe by chance, welcome to The Together Plan, a charity working to revive Jewish community life in Belarus. History, heritage and culture are high on our agenda and food is intrinsic to who we are… Do explore the rest of our website to find out more about our current projects as well as how you can get involved and support us.

Cholent is a quintessential Jewish dish and is a product of the Shabbat (Sabbath) rules that prohibit cooking (‘thou shalt not kindle fire on the sabbath’ Exodus 35:3). My immediate ancestors living as new immigrants to Britain in the East End of London would have made this special dish (meat was expensive and as a luxury was usually only eaten once a week and on the special Sabbath day) early on Friday morning. The big pot of ingredients would then often be taken to the bakery where the Challot (plated loaves used for Shabbat) would be just finished and the ovens still hot. The pot would be put in the bread oven and left to cook for at least 24 hours in the residual heat of the bread ovens, being collected sometime after returning from synagogue (shul in Yiddish) and taken home.

And this event, at the end of shul, is most likely where the name of the dish comes from – Shul End being the end of the service and very close to Cholent.  French Jews argue that it’s a bastardisation of Chaud Lent (warm and slow) and there are those who insist it comes from Hebrew ‘she’lan’ meaning ‘that which rested’.

As with all the best recipes, there are thousands of variants and no ‘right one’.  Sephardi Jews (Sephard is Hebrew for Spain) have a very different taste profile for their cholent to the Ashkenazi Jews (Ashkenaz is Hebrew for German). Feel free to switch in or out your preferred cut of meat, pulse and even spicing, according to your own taste. Below is how I enjoy it most.

This dish must be slow-cooked. Whether you use a slow cooker or a big pot (ideally cast iron like a Le Creuset pot – a cast iron pot seems to impart a flavour and consistency that other pots don’t!) is up to you. If you intend to have a pot on the stove for 24 hours you will want to use a diffuser. Alternatively, put it in the oven at 75-80 C.  24 hours is the minimum time. It will need checking on and may need liquid added to it as it progresses.

I like to use beef shin as it has a lot of connective tissue which renders down with the slow cooking making the dish ‘gedempte’ as they say in Yiddish. It also holds together well enough but then ‘feathers’ when you eat it.  I also prefer pearl barley as the pulse, but you can also use chickpeas or indeed any pulse or bean you like).

If you can get it from your butcher, adding some marrow bone gives an extra depth to the flavour.

Eggs – something Sephardi in style, you can add them to the dish whole, in their shells. They will need peeling and adding back in at the end. They go brown in the cholent as egg shells are semi-permeable.

Prep up all your ingredients, chopping the meat into good size chunks.

Layer it in your pot with the potatoes then onions and garlic, sprinkle over the spices and salt, then the meat on the top and finally the pearl barley. Now add the stock, bring to the boil (if cooking on the hob) then reduce to the slowest possible cook. If you’re using a slow cooker, I find the warm setting is ideal (rather than low or high).  80 C in an oven for 24+ hours will also do it.

Check it every 4-6 hours (more like 2-4 once you get closer to the end of the cooking period) that it still has sufficient liquid.

The biggest challenge I find with Cholent is not eating so much of it you can’t move or breathe for the rest of the day.