The Together Plan in the USA – getting connected! 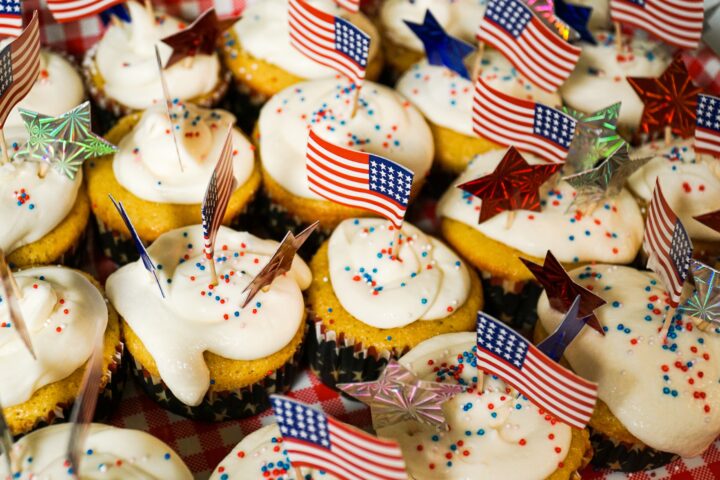 In 1791, Catherine the Great ordered that Jews could only live in the Western region of the Russian Empire. It was an area in which permanent residency by Jews was allowed and beyond which Jewish residency, permanent or temporary, was mostly forbidden and it became known as the Pale of Settlement. The Pale, which lasted until 1917, included all of modern-day Belarus, Lithuania and Moldova, much of Ukraine and east-central Poland, relatively small parts of Latvia and what is now the western Russian Federation. By 1897 there were approximately 5 million Jews living in the Pale of Settlement.

Sir Martin Gilbert states in The Routledge Atlas of Jewish History that as a result of pogroms between 1880 and 1917, oppressed and presecuted Jews became increasingly political and Zionistic forcing many to emigrate. Between 1880 and 1914, over 2,000,000 went to the USA, 200,000 to Britain and 60,000 to Palestine. Further waves of emigration followed as a result of subsequent violent attacks in eastern Europe. It is therefore no surprise looking at the destinations that these fleeing Jews headed for, that so many of their descendants today live in the USA.

According to The American Jewish Population Project, in 2020, there were 7.6 million Jews of all ages, including 6 million Jewish adults and 1.6 million children living in the USA. In 2020, as an outcome of the Coronavirus pandemic, our team at The Together Plan took the decision to focus on developing our Archive Service to help people find their ancestral records in Belarus. It was a way to connect those in the diaspora to their ancestry, a way for the charity to raise charitable income at a time when no events were possible, and a way for us to deepen our understanding of the Jewish communities of the past. 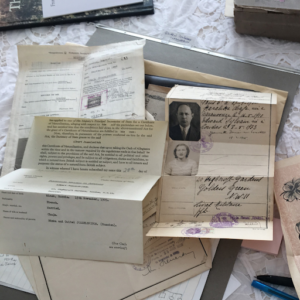 Photo credit: Debra Brunner – with thanks to Jeanette Josse (documents from her family archives)

As the Archive Service grew, more and more people from the USA reached out to us asking for our help, which of course made perfect sense looking at the statistics above, knowing that so many Jews have strong ancestral ties to the territory that is modern day Belarus. These are the descendants of those who were forced to flee persecution in search of new and safer lives in the Promised Land at the end of the 19th and beginning of the 20th century.

As so many people in the USA were reaching out to us it became clear that we needed to have an American presence and so we set about establishing a sister American non-profit organisation to The Together Plan. We are excited to say that this organisation is now an entity with the name ‘Jewish Tapestry Project’. Why that name? Simple – when you weave together the threads of our Jewish past – we start to get a much clearer picture and we become much more connected.

This September, I travelled to the East coast of America to launch Jewish Tapestry Project. My travels took me from North Carolina to West Hartford Connecticut, stopping at Philadelphia and New York along the way. This was a chance to give talks, meet with people and collect survivor and personal stories. The trip was deeply meaningful, educational and enlightening. It gave me a closer insight and understanding of the American Jewish community and a chance to hear first hand from people who have roots in Belarus – giving some sense of just how many people in the USA have connections to eastern Europe. The deep ties to the homes that were left behind was palpable. Not all of the people I met were survivors or descendants of survivors. Some were younger people who were born in Belarus, but had left in more recent years. Here too I heard fascinating stories of life in the Soviet Union, the challenges and complexities, the obstacles and struggles faced in leaving, the dilemma of wishing to never look back battling in constant opposition to the soulful pull to the place that was once home and the home of ancestors now long gone.

In North Carolina – my hosts were warm, welcoming and showed immense kindness. Here I heard the story of Susan’s mother who survived the Nazis in her hometown of Novogroduk (western Belarus – was Poland before 1939) by hiding in a hole in the ground for two years and then becoming a partisan in the Naliboki Forest, with the Bielski brigade.

Vesta Svendsen, born in Pinsk, grew up in Brest, Belarus. Today she lives in Cary, North Carolina with her husband and three young children. Vesta only discovered she was Jewish through DNA and has embraced her heritage fully. She is a committed synagogue member, is undergoing a Masters in Genocide Studies at Yeshiva University (New York), is learning Yiddish and is now the Vice President of Jewish Tapestry Project. Vesta found The Together Plan through an Instagram post where a Belarusian poet had featured the book that we translated – 27 survivor stories – ‘We Remember Lest the World Forget – Memories of the Minsk Ghetto’. Vesta is living proof that the work of The Together Plan and now Jewish Tapestry Project is an absolute imperative. With thanks to Vesta, I was warmly welcomed at the Beth Meyer Synagogue in Raleigh and had the opportunity to talk to the community about our work and to introduce Jewish Tapestry Project.

In Philadelphia I was hosted by Sofia Dobkina, daughter of Polina Dobkina who survived the Minsk Ghetto age 16. Thirty six members of Polina’s family were brutally murdered in the ghetto. Sofia had helped us to interview her mother in 2016 when we were doing our research for the translation of the book ‘We Remember Lest the World Forget – Memories of the Minsk Ghetto’. Sadly Polina died in 2020 at the age of 94, but my visit to Philadelphia was at last a chance to meet Sofia, learn more, give a talk and meet more people. To read Polina’s story click here (page 48).

In New York, I was warmly welcomed and hosted by Gloria Mills on Manhattan’s Upper West Side.  Gloria and I met through the Manhattan Jewish Business Network – another positive outcome of the pandemic lockdowns. With thanks to Gloria I was able to speak at the Carlebach Synagogue and the Ohab Zedek Synagogue. It was at the latter that I had the honour to meet with Michael Skakun, author of ‘On Burning Ground’ the true and completely remarkable story of his father – Joseph Skakun. During my time in New York I found time to visit the Bialystoker Synagogue and the Tenement Museum – giving historical context to the story of Jewish immigration from Eastern Europe to the USA. 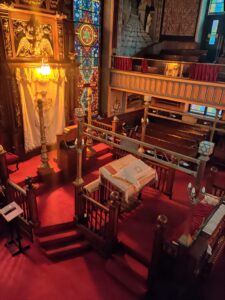 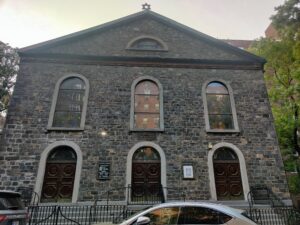 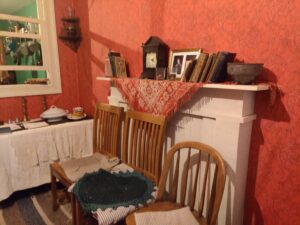 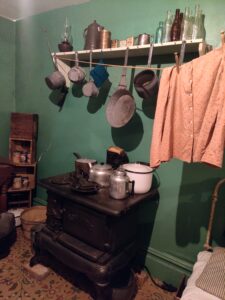 In Hartford Connecticut I had the immense pleasure to stay with Alan and Lois Berkowitz who both have incredible stories to tell. Alan’s grandfather, Moshe Berkowitz, was one of the few survivors from Voronava (Poland before 1939). 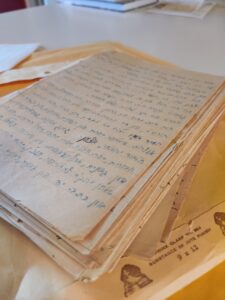 In September 1939, Voronava was occupied by the Red Army and, on 14 November 1939, incorporated into the Byelorussian SSR. From 23 June 1941 until 11 July 1944, it was occupied by Nazi Germany. It is today a town in Belarus very close to the Lithuanian border. In 1949, in a DP camp, Moshe Berkowitz penned his memories of Jewish life in Voronova in Yiddish script onto pages pulled from an exercise book. Those pages are now in the care of Alan, his grandson, and in the 1980’s Moishe’s words were translated to English, on a typewriter. The text is a personal memory of the Jewish shtetl that was Moshe’s home before the German invasion in the summer of 1941. Written in two parts – he recounts daily Jewish life in Voronava, naming fellow shtetl dwellers, describing the challenges of daily life. In stark contrast the second part of the narrative is a dark and painful narrative of the destruction of the Voronava Jewish community. It is a rare piece and one yet to be fully appreciated by a wider audience.

Lois’s father’s story is equally powerful. Born in Pruzany, Harvey Shreibman was one of the few Pruzhany Jews who survived deportation to Auschwitz. In Lois’s words – ‘it was a miracle that he survived, not only his terrible experience of being a prisoner of Auschwitz, but also the numerous death marches’. Harvey Shreibman was recorded telling his story in 1982 – click here for the recording.

The Together Plan Charity, now with support from Jewish Tapestry Project in the USA, is:

Connecting Jewish people all over the world to their ancestry

Sending humanitarian aid to the poorest in society

Engaging young adults in our Youth for Youth programme

And just a final note on the Archive Service….In the past two and a half years we have developed this service to a high standard, run by a dedicated and trained team and we are continuously appraising how we can consistently improve what we do. This service not only helps people find documents that are not easy to access in Belarus, but also gives us greater insight and understanding as to how the communities of the past lived which is a vital source of information for the Belarus Jewish cultural heritage route that we are building. But most of all – we love that it is a conduit that connects us to people all over the world, because TOGETHER – we can make a real and powerful difference. For more information on the Archive Service – please click here.

If you are in the USA and would like to know more and to support our work  – please click here.