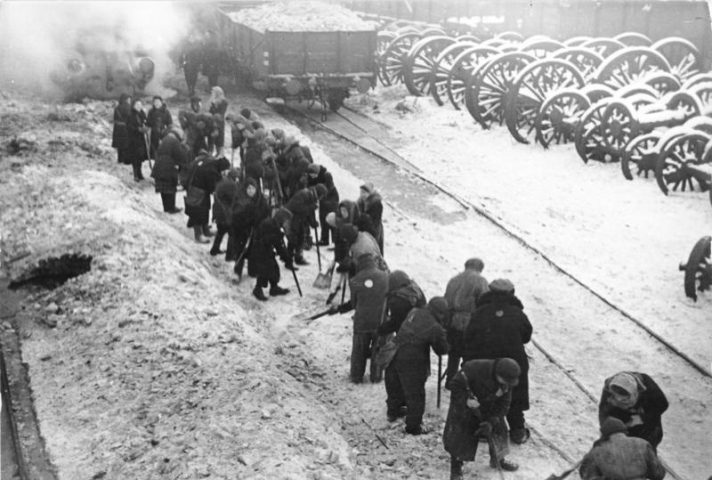 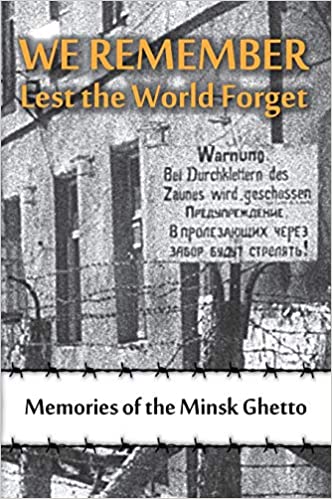 We Remember Lest the World Forget: Memories of the Minsk Ghetto (translated by The Together Plan) – book review

There is an insufficient number of appropriate adjectives to fully explain the harrowing, chilling, disturbing, heart-breaking and terrifying nature of this book, although in parts it is also inspiring, uplifting and moving. The emotions generated by reading this book are complex and deeply moving. The holocaust and suffering of the Jews in the ghetto’s and death camps in the territories of occupied Poland and the Baltic states have received considerable attention in published works in the English language, particularly in recent decades since the collapse of the Soviet Union and the state socialist block in Central and Eastern Europe, which has seen many of these states reorientate themselves westwards and become integrated into western political and institutional systems.

The catastrophic carnage faced by the population of Belarus generally and the Jews in Belarus, in particular, has received much less attention, partly due to the fact that the country has remained relatively closed and isolated from Western influence and as a result, is still shrouded in mystery for many Western audiences. It is also only relatively recently that the formerly dominant Soviet national narrative of the Great Patriotic War being a glorious victory within which the Soviet people collectively suffered has evolved sufficiently to allow a distinction to be made and the specific suffering of the Jews to start to be acknowledged. For that reason alone, the publication of this book in English is a hugely important milestone that will help to bring this suffering and these stories to a wider audience so that they get the recognition and acknowledgement that they deserve.

The format of the book is one of the things that makes it so powerful, a series of short stories about the experiences of 27 of the few remaining survivors of the Minsk Ghetto. Oral histories present a number of conceptual and methodological challenges, but the stories are presented here in their purest raw form without commentary or analysis, which in a way makes them even more compelling and thought-provoking. The matter of fact reporting of these horrific events is shocking in its simplicity and leaves much left to the imagination of the reader. There is a useful glossary and valuable contextual material available in the introductions and appendices, which will be useful to the Western reader who may be unfamiliar with the realities of Central and Eastern Europe, with its ever-shifting borders and populations in the first half of the twentieth century.

The contributors were all children at the time of the described events and the fact that these accounts are memoirs of their childhood experiences makes them all the more harrowing. The natural inquisitiveness of children, even in these circumstances, is brought dramatically into perspective when one contributor remembers curiously observing the children of Wilhelm Kube playing, almost wanting to join in. Kube was Generalkommissar for Weissruthenien (Belarus) who was responsible for the Minsk Ghetto until he was assassinated in Minsk in 1943, resulting in savage reprisals against the local population. These children would have no doubt played happily together under different circumstances and may even have become friends and would undoubtedly have had different futures.

There are a number of key themes that are intertwined through the various stories, perhaps not surprising given that they are based on shared experiences and memories of events in a specific place at a specific time. One of the most powerful common themes is the sheer randomness of life and death and the lack of control over your own destiny and the destiny of those around you. The stories recreate a terrifying world where split-second decisions often determined whether or not the Ghetto residents got to live for another day and the most appalling atrocities became normalised in the eyes and minds of these young witnesses.

A number of contributors talk of common experiences such as the horror of the pogroms, hearing the approach of the gas vans and the terror of hiding in the malinas waiting silently, frightened to breathe in case they were discovered and a grenade was thrown into the confined space in which so many people were concealed trying to avoid the regular round-ups. The uncertainty of whether or not parents would return from work details or whether they had been murdered or transported to the nearby death camp at Maly Trostenets and conversely the uncertainty of parents returning to the Ghetto after work wondering whether their children and other loved ones had been murdered during their absence.

Numerous contributors tell of family members disappearing never to be seen again, these tragedies only being slightly compensated through a few heart-warming examples of people finding relatives who they had assumed had perished in the years after the end of the War. The constant struggle for survival and the unimaginable hunger is impossible to comprehend, the purpose of life is reduced to a frantic search for a few scraps of food to stay alive. Each search outside the Ghetto to beg for food in the so-called Russian district of the City potentially being the last time that the Ghetto inhabitants would ever need to search for food. 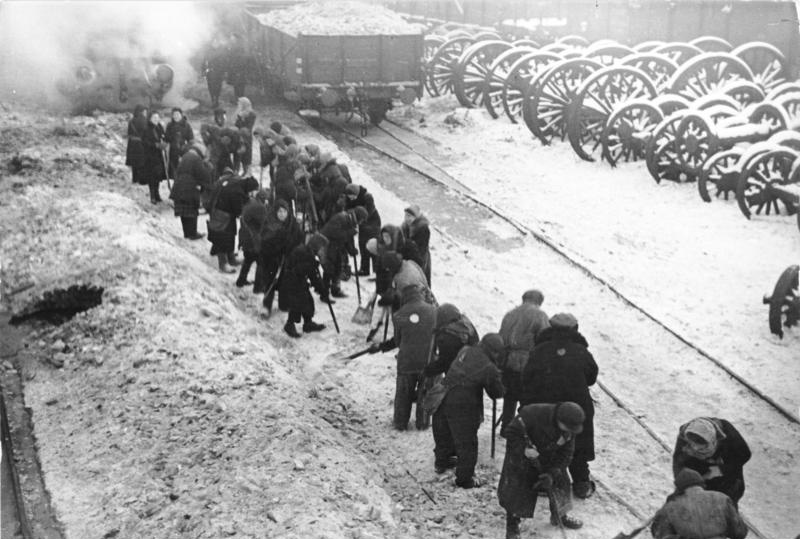 The demonstration of kindness and bravery from non-Jewish citizens who provided food and shelter and even on occasion by Germans, the desire for self-preservation and the value of small pleasures provides some relief among the narratives of terror, the contrast with the daily horrors making them even more powerful. The cumulative effect of the misery and horror and the moral dilemmas encountered in the daily life experiences of the Ghetto residents is impossible to comprehend and is a testament to human endurance. The courage and fortitude of the contributors, not only for enduring the events but also for unlocking the deep recesses of their memories to revisit and recount them is astonishing, including Nelly Shenker’s admission that the pages were wet with tears as she tried to write down the memory of her and her mother hiding all night under dead bodies in the pit before they could make their escape in the morning. The moral dilemmas and heartbreak of mothers such as Liza Ruderman having to send her son away in order to increase his chances of survival, not knowing if she would ever see him again, bring the realities of these experiences to life.

The book also highlights the futile nature of some of our day-to-day concerns in contemporary life where we become annoyed with trivial inconveniences like a bus or train being a few minutes late. Unlike these survivors, we have never had to walk from Minsk – Skirmantovo, a distance of 40-50 kms through forests and swamps, sit in a swamp for 5 days to avoid the death squads or cope with the loss of parents and entire extended family before going on to live in Siberia, Kolyma and Magadan for the rest of our adult life like Lidiya Petrova.

The small number of survivors in comparison to the numbers who perished make the links between some of the stories all the more incredible. The stories of Frieda Reizman and Maya Radashkovskaya recount how Maya was rescued from an orphanage and taken in by Frieda’s mother. The pride of survivors in the certificates and medals, that some subsequently received from the Soviet state, contrasts with the lack of specific recognition of Jewish suffering and the Jewish contribution to victory in the official Soviet national narrative. The hollowness of contemporary battles to interpret and reinterpret history and the role of specific personalities in ways that make these figures and national narratives more glorious and palatable are dramatically exposed.

The destruction of the Jews in the Minsk Ghetto is reflected in the destruction of the city itself, with Minsk being almost completely rebuilt in the post-war period to reflect the grandiosity of Stalinist urban planning principles in a way befitting one of the thirteen cities dedicated as Hero City of the Soviet Union. The search for Jewish Minsk is therefore challenging with entire swathes of the city being rebuilt, street names being changed to reflect the glory of the Soviet Union and relatively little official acknowledgement or recognition of the Jewish heritage in the form of monuments. One can only guess at the psychological impact on survivors of losing not only extended family and friends but also of losing physical reference points and the associated pre-war memories in the urban environment.

The book ultimately creates as many questions as it provides answers and generates a burning desire to ensure that these stories are told to future generations. The Jews in the Minsk Ghetto, the same as Jews worldwide, were far from a homogenous group with communities, families and individuals from diverse social and religious backgrounds and geographical settings. The different experiences of the so-called “Hamburg Jews” reinforce this diversity. But each story relates to a real family who lived and loved together, had their disputes and diversity of life experiences. The courage of the contributors for revisiting and sharing these traumatic events provide an immense contribution to the history and the collective memories relating to the holocaust.

The number of survivors is naturally dwindling over time and this book will help to strengthen capacity and identity amongst remaining Jewish communities, educate future generations about the dangers of hate and keep the flame of the memory of this extraordinary generation alive. The stories included in the book provoke thoughts about the countless untold stories of those who did not survive and this alone emphasises the importance of tolerance and learning from history. The book will be of immense interest and value not only to those directly or indirectly affected by the events and those interested in the history of the holocaust. The book will also be of immense value and interest to others with whom the responsibility for learning from history and shaping the future of the human race lies. It has certainly generated a burning desire in me personally to search out more of the Jewish heritage on my next visit to Minsk.

To read more about ‘We Remember Lest the World Forget – Memories of the Minsk Ghetto’ click here.

Being interviewed in Minsk for Belarus television – click here.