Navarudhak – a portrait in miniature 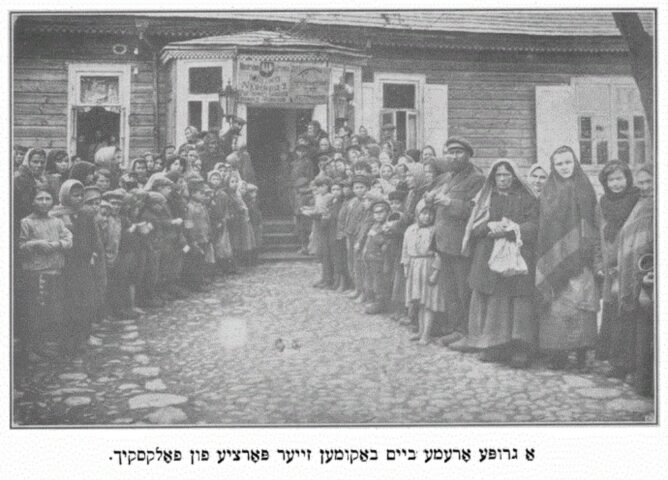 Cartographically speaking, Belarus lies at the very heart of Europe’s landmass.  Polotsk, an important trading post on the River Dvina dating back to the Vikings, as well as a once golden spark of Jewish life, is smack at the epicenter of a continent, holding fast to its accolade, though villages in neighboring Lithuania insist that bragging rights are theirs.

Be that as it may, Belarus has, alas, been given short shrift by Western historians, dismissed as a historical afterthought, a mere geographical expression. Long regarded as an appendage of other nations, be it the Czarist empire or the Soviet Union, Belarus often got lost in the shuffle. Entire centuries appeared to hang suspended, unfixed to a master narrative, without which the various assemblages of fact and theory would not hold together.  Across the Atlantic, assimilation did the rest. The descendants of Belarusian immigrants consigned the foreign-sounding names of their ancestors’ towns and villages to near oblivion, banished them to the back of beyond, a region betwixt and between, swallowed up by poverty, tedium and history and, all too often, by outright carnage. Indeed, this region has earned in our time the frightful sobriquet, “bloodlands,” a term brought up to date by the historian Timothy Snyder.

For Jews, however, historic Belarus, part of the realm of what was known as “Lita,” the land of the Litvaks, a region once governed by the Duchy of Lithuania (a region far larger than its latter-day namesake) never devolved into obscurity. This northern swath extending as far east as Smolensk, if not Muscovy itself, once part of the multitudinous Polish-Lithuanian Commonwealth, a monarchy with an elected king and parliament dominated by local nobles, a forerunner of democracy, would come to play a signal cultural role in Eastern European Jewish history. How could it not when the Commonwealth encompassed virtually what is today Poland, Belarus and Ukraine, as well as most of the Baltic states. Indeed, “Lita” gave birth to a firm typology. The Litvak’s characteristics — a gift for learning and Talmudic exegesis, a taste for abstraction and in time for science, a special regard for the autonomy of perception and judgment, a flair for exposition, inquiry and skepticism, a wry, dry sense of humor – left an indelible stamp on the history of the Jews over time. Indeed, this characterisation has stuck over the centuries, the very classic portrait of the “mitnagdim“, the fierce opponents of the early rising tide of Hasidism, which spilled as far north as Lithuania and what is present-day Belarus. Viewing themselves as a powerful astringent against what they regarded as the excesses of ecstatic religiosity, the mitnagdim often sought to excommunicate these new celebrants of a febrile religion.  However, the Lithuanian and Belarusian Hasidim never lost their Litvak pronunciation and psychological profile. Most especially, Chabad, the most internationally oriented of today’s hasidic sects, widely acknowledged to be the gold standard in Jewish outreach, shows how ingrained Lithuanian-Belarusian traits prove to be. Chabad’s founder Rabbi Zalman of Liadi, in his masterpiece the “Tanya“, underscored the governing mind as the royal road to mystical union with the divine. Indeed, the very name of Chabad, which arose in what is today the easternmost parts of Belarus, is an acronym of the tri-partite structure of reason –“Khokhma, Bina and Da’at“. In this instance, as in many others, geography can be said to be destiny. 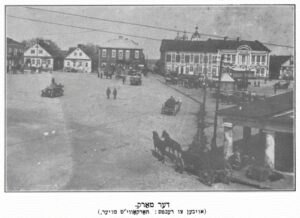 Let us now narrow our searchlight and focus on a shtetl, at once singular and representative of what was best in Jewish Belarus. Nestled in the region’s northwest pocket, Navarudhak (Yiddish, Navaredok; in Belarusian, Russian and Polish it means “new township”), one of the oldest Belarusian towns founded in 1044 by Kievan princes, served as a trade route from Lithuania to Moscow in the late Middle Ages.  Famous for its Jewish clergy and matzoh bakeries and infamous for its local seasonal fires, it evolved into a center of Jewish rabbinic leadership, as well as scholarship. Novaredok became home to towering talmudists such as Rabbi Yitzhak Elchonon Spektor, the foremost rabbinical authority in nineteenth century Russia, a wise and indefatigable leader, after whom the rabbinical seminary of New York’s Yeshiva University is named; as well as Rabbi Yechiel Michl Epstein, the spiritual leader of Navaredok for 34 years, a man who traced his family origins to the Spanish exile of 1492 and more antiquely to the banishment from Jerusalem two millenia ago by the Roman commander Titus. The author of the “Orakh Hashulkhan“, Rabbi Epstein’s magnum opus, a code of “halakha” (Jewish law), perhaps second only to that of Maimonides, placed him at or near the apex of Jewish learning. His rabbinic fame extended to his progeny: his grandson, Rabbi Meyer Berlin, the founder of Zionist Mizrachi Orthodox movement, which exercised great influence in inter-war Polish life and in the newly born State of Israel, and for whom the Israeli institution of higher learning, Bar-Ilan University in Ramat Gan, is named. Rabbi Yekhiel Michl Epstein of Navaredok went on to ordain some of the most prominent rabbis of his or any era: Rabbi Abraham Isaac Kook, the first Ashkenazi chief rabbi of British Mandatory Palestine, a formidable intellect and guiding spirit; Rabbi Yehezkel Abramsky, a head of the London Beth Din rabbinical court, whose son Chimen Abramsky, a left-wing intellectual and book collector supreme, hosted one of the most coveted cultural salons in the English capital; as well as Rabbi Yosef Shlomo Kahaneman, the head of the legendary Ponvezh yeshiva, a Zionist sympathizer, and the uncle of Professor Kahneman, the 2000 Nobel Prize winner in economics for his masterly work in the psychology of judgment and decision making.  This pleiade of Jewish learning that drew its origin from Navaredok is as broad as the firmament itself.

Perhaps even more uniquely, Navaredok was the epicenter of the most ascetic variant of the “mussar” movement, moral instruction in right conduct, which exercised a fairly decisive influence on personal character development in Orthodox Jewish circles in Poland, Lithuania and Russia. An “echt Yiddish Tolstoyism,” it could be said to have brought rabbinic Judaism to the brink of monastic self-denial.  The Vilna-born Chaim Grade, whom Elie Wiesel praised as “one of the great—if not the greatest–of living Yiddish novelists,” brilliantly examined and excruciatingly exposed in his classic novel, “The Yeshiva“, the dramatic philosophical and ethical dilemmas of those dwelling in the emotionally pinched yet ethically enlarging Novaredok mussar movement.  Indeed, Navaredok, the cradle of the network of mussar yeshivas founded by Rabbi Yosef Yoyzl Hurwitz, an educational pioneer of the purest, as well as the austere, strain, proved to be a strong, if controversial, educational model for scores of yeshivas in pre-revolutionary Russia, including those in distant Kyiv, Kharkiv, Rostov-on-Dov, and Kherson, and later under the name of Bais Yosef, in independent Poland, taking up the instructional slack when other institutions could not. 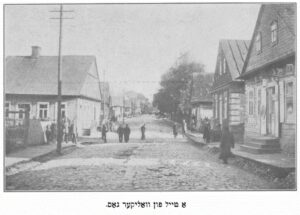 Nowogrodek, as it was known during the Polish-Lithuanian Commonwealth period, as well as in the twenties and thirties of the last century, was a kind of literary Parnassus, a peak of Polish Romanticism.  As the birthplace of Adam Mickiewicz, Poland’s literary bard, it assumed an important place in a budding national self-consciousness, all the more so as Poland lay under the jackboot of Czarist Russia. Mickiewicz, feted by Europe’s literati and cultural eminences–Chopin and George Sand in Paris, Pushkin in Moscow, Goethe in Weimar and Mazzini in Italy (the latter regarded him as the greatest poet of the age)–was the undisputed maestro of the Polish language, its felicities and flavors, as well as its poetic polyphony. A philosemite (his mother was regarded in some circle as a Frankist, a follower of the Jewish antinomian cult movement named after Jacob Frank, a false messiah), Mickiewicz was equally an Islamophile, whose “Sonnets of Crimea“, espoused a love of the region’s Muslim Tatars. He helped put Nowogrodek on the literary map of Poland with his magnum opus, “Pan Tadeusz” (Mr. Thaddeus), and eventually by sheer prophetic passion put literary Poland on the face of Europe as well. 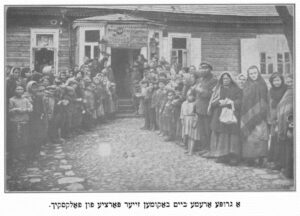 Compromising a population of some 12,000 (of whom half were Jewish), interwar Nowogrodek was above all, a borderland town, looking out on the horizon of many cultures: Polish, Belarusian, Lithuanian, Jewish, Muslim. indeed, this ethnic amalgam gave rise to creative tension and ferment. During World War II, my father, Joseph Skakun, relied on the town’s multiple cultural valences to concoct a series of assumed new identities that allowed him to survive a war of annihilation. His is a tale of moral vertigo, a collision of worlds, the story an artful dodger who in a moment of greatest danger stitched together a “coat of many colors,” much like his biblical namesake, to outwit and outrun genocide. In “On Burning Ground: A Son’s Memoir” (St. Martin’s Press/Macmillan), I recount how he weaponized talmud and mussar to fashion a Christian/Muslim profile, allowing him to negotiate the most torturous twists and turns of a harsh and deadly destiny. Navaredok proved to be a cultural incubator permitting my father to craft a vehicle to by sleight of hand to confront the most terrifying ordeal of survival. See www.onburningground.com.

Navaredok’s defiant spirit also revealed itself at the height of the Holocaust in the illustrious bravery and supreme compassion of the Bielski brothers, who managed to save 1200 hundred Jews by escaping into the nearby Naliboki forest, creating a sustaining community of care and concern in the darkest night of history. Tuvia Bielski, trained in the interwar Polish army, famously said that he’d rather save one elderly Jewish woman than kill ten German soldiers and their local henchmen, a guiding moral principle of the indomitable Jewish spirit cultivated in Navaredok and its environs.

Navarudhak/Navaredok is but one instance of why present-day Belarus, from Brest in the west to Vitebsk in the northeast, once constituted a centerpiece of Jewish culture in Europe, inclusive of top-drawer rabbinical academies, of first-rank literature and journalism, of linguistic hothouses in which the development of both Hebrew and Yiddish could flower, and so much more. An understanding of modern Jewish life is inseparable from Belarus. The Together Plan, in making this recognition and rediscovery an essential part of twenty-first century discourse, helps to reclaim a region otherwise lost in the dark cartography of blood and mass trauma.

More images of Nowogrodek can be found here