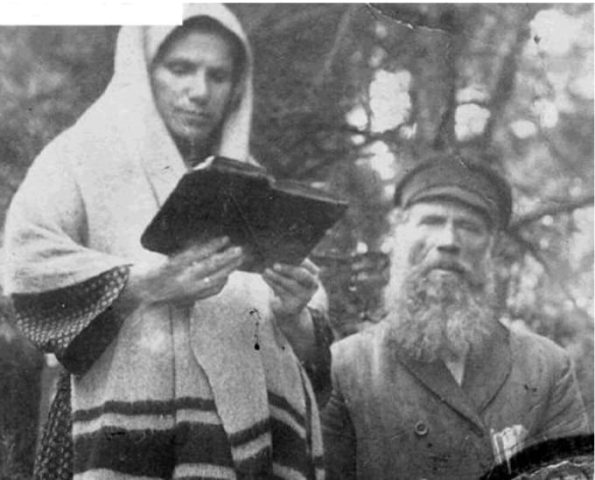 The Barbakow family used to live in a Belarusian village, in the north, called Druya. This was before the Second World War. They had a windmill next to the Daugava river, as far as we know they made flour, so we believe they had to bake bread with that flour sometimes.

Some years before the war, Jaim Barbakow (my great-grandfather) headed to Argentina because his mother, Zisle, did not want him to join the army. Some people in my family (including my mother and grandmother), say that Zisle went to an army building to take Jaim home, and then, just to be sure he was not going to the army again, she put him on the first ship they could, and, this ship was heading to Argentina. Jaim left the rest of his family behind, his parents and siblings, and they faced the war.

Monus, the brother of my great-grandfather, Jaim, was in jail by the time the Holocaust started. Haia, his sister had to get food  to him. So, she went every day to the jail to bring him food, until someone from the jail (we believe a guard) told her that she should not return to Druya because the Nazis had arrived there. Haia did not return until many decades later with the purpose of  building a monument in honour of those who died during the war.

During the war, Haia became a partisan. She had a really important role, she carried guns and supplies for the partisans. I am not sure in which area they were, but I know she had to carry the weapons through a city. And yes, she did, she carried guns on public transport, in front of policemen. She did it thanks to the bread, she hid the guns in a basket where she also carried bread, pretending to be selling the bread. When the war ended she moved to Israel.

Monus also survived, but I am not sure how, we believe that the guards of the jail freed him somehow. He ended up living in Ukraine.

Returning to Jaim. Many years after he moved to Argentina he married a Romanian woman called Rachel Bromberg, they had three children, one of them was my grandmother, Rifka (well, Rebeca, because there was a law in Argentina that did not allow people to name their children with foreign names. Jaim also became Jaime, and Rachel became Raquel). My grandma moved to Mexico when she was older for business affairs. As a result, my mother was born Mexican, and so therefore was I.

Now, my mother and I live in a town lost in the mountains called Xalapa. Even though the family lives far away and developing our Jewish side here is complicated, we try not to forget the family nor our traditions. We make Challah each Friday (at least we try to), and we celebrate other major festivals even if we make dinner just for us. But, also some Mexican traditions have become part of our festivities. One of the most important is Día de Muertos (The Day of the Dead).

Día de Muertos is a festivity in which we remember our families and friends that are not here anymore. We celebrate it every November 1st and 2nd. As part of the celebration, we make a special bread called Pan de Muerto (Bread of the Dead), leaving aside that is a typical bread for this festival, I believe there is no better way for remembering the Barbakow family than with bread (that’s why I chose to make this bread my specialty). In Día de Muertos you make an altar for those you want to remember (there is also an altar for those that have been forgotten or have no altar to visit), this year my mother and I dedicated it to some friends, the Barbakow family, but also to the Yiddish theatre group in Druya (we found a photo in a book that we have, and, since we love theatre we thought it would be a good idea). This theatre group was part of the Betar Zionist group. The altar might vary from one year to another, but it has to have Pan de Muerto always. I only have two photographs of my family from Druya. One is of Fania Barbakow, the sister of my great-grandfather. Her story is sad but so interesting. She died in 1942 because of the war, but, 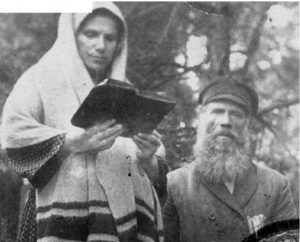 according to many testimonials, she was brave until the end. She wrote some notes when she was hiding from the Nazis. Here is a link where you can find her last note, which was written on an official Nazi document which is incredible. She also encouraged the other Jews to not surrender. The other picture is of my great-great-grandparents Zeev Barbakow and Zisle Perloff.

I wanted to share my recipe for Pan de Muerto with you because it is very, very tasty, and also because, one of the better ways for creating a connection between cultures is food, so, without more preamble, here it is!

Pan de muerto (Spanish for ‘”bread of the dead”‘), is a type of sweet bread, traditionally baked in Mexico during the weeks leading up to the Día de los Muertos, which is celebrated from November 1st to November 2nd.

Ø  1-3 oranges (it depends on your taste, but remember they give the taste to the bread).

Ø  Extra cinnamon, sugar, and butter, but this is optional.

How to make it?

1. Mix the yeast with 3 spoons of flour, 1 spoon of sugar, and the warm meal in a bowl. Cover the bowl and leave it in a warm place.

2. While the mixture rises,  zest the oranges until you see the white part of their peel, try not to use the white part (the pith) or your bread might have a bitter taste. 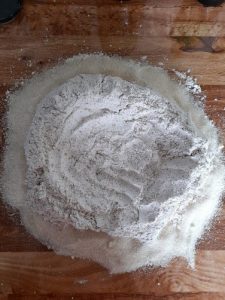 3. On a clean surface, mound the flour and make a hole in its centre. Around the flour, pour the sugar and the salt.

4. In the hole, pour the yeast mixture and add the eggs one by one.

5. Slowly, start kneading, mixing the flour with the yeast mixture.

6. When you see everything is mixed in one single mass, add the orange peel, the butter, and the vanilla.

7. Knead until it does not stick to your hands or on the table. This might take you a lot of time (I usually knead the dough for an hour, more or less). Consider that, after everything becomes one single piece of dough, we will be looking for the air to go into the dough, so it gains its softness. I recommend cleaning the surface from time to time, so the dough will be ready faster, otherwise you will be kneading for hours and the dough will never be ready because some of it will stick to the surface and won’t be mixed with the rest.

(In this video I show how I knead in a faster, funnier, and stress-free way, I sincerely recommend it. You will also see my altar, in honour of my ancestors, that I created this year).

8. When the dough is ready, let it stand until it doubles in size.

9. Make the bread. You are free to give it the shape you like, but, the Pan de Muerto has a traditional shape. First, you make a semi-sphere and on it, you place strips out of the dough that are supposed to represent bones. Place them perpendicularly (each bread has two of these strips), and, where both strips cross you put a small sphere. In the images you will see how to make the strips, so your bread can look like an authentic Pan de Muerto. 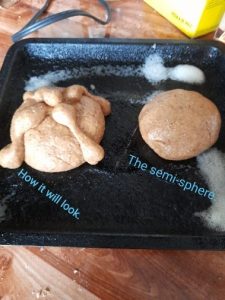 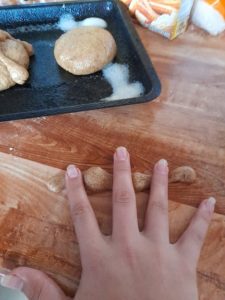 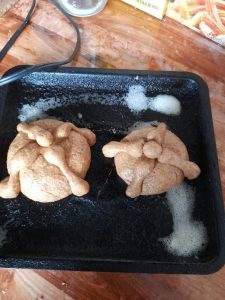 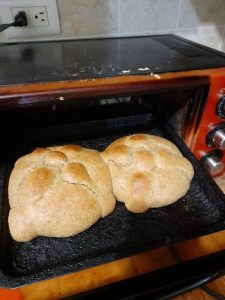 10. Once you have shaped your bread, let it stand again for 30 minutes to an hour.

11. It is now time for the baking. Put it in the oven at 170°C for 15 minutes or until you notice it has a bright-brown colour and you can stab it with a fork or knife and it comes out clean.

12. This next step is optional. Mix the extra sugar with the cinnamon. Melt the extra butter and brush over the bread (do not put too much butter on it!). Then  sprinkle the mixture of sugar and cinnamon on the bread.

13. Voilà! Your Pan de Muerto is ready, I am pretty sure you will enjoy it!