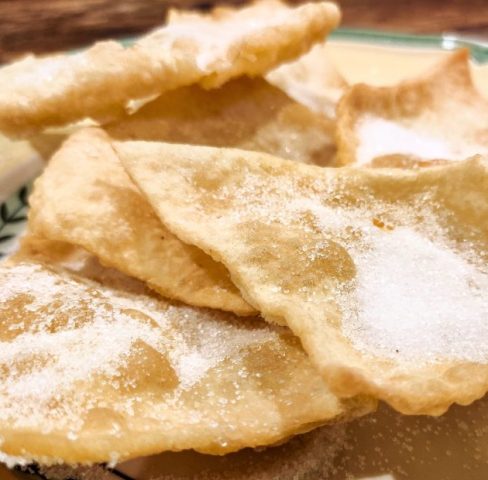 At some point during the mid-50s my family moved from accommodation ‘over-the-shop’ in Leytonstone High Road to a detached house in Lord Avenue in Ilford. It was a huge shift in lifestyle which they wholeheartedly embraced. My father (who had come to the UK from Warsaw, Poland in the late 1920’s, with a few years stop in Paris) surprised us all by becoming a gardening enthusiast complete with greenhouse and a penchant for geraniums, while my mother, in her new ‘modern’ kitchen, suddenly began to recall a hitherto abandoned repertoire of recipes. Most of these were remembered from her childhood in Plinsk, a Polish shtetl with a fifty per-cent pre-war Jewish population. One of these recipes was for Reselekh, a plate full of  tea-time delicacies that she was able to conjure up in minutes for family members and other unexpected guests alike. While we were all sitting around the kitchen table chatting, the enamel kettle would be rattling on the gas-stove, and she would be busily producing these crisp and golden tea-time favourites. Here is the recipe:- 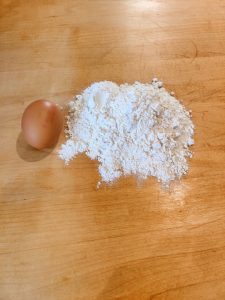 A pinch of salt

A sprinkle of sugar

Combine the flour, beaten egg, salt and water to form a ball of soft and pliable dough. 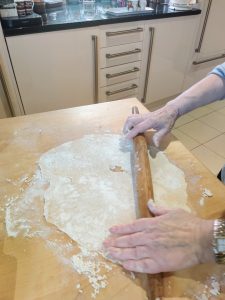 Roll the dough as thinly as possible.

Cut into 3 to 4 inch squares or diamonds. 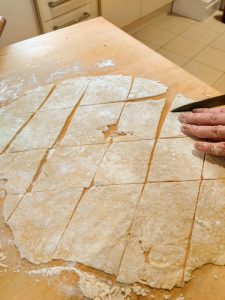 Pour some sunflower oil into a shallow pan of diameter approximately 10 inches/26cm. The oil should be around 1cm deep.

Tip: Before starting to cook. prepare a plate covered with a sheet of kitchen roll to receive the hot reselekh. The paper will absorb any excess oil while the cooked reselekh are cooling

The oil will be hot enough to start frying when a crumb of pastry is dropped in and it starts to sizzle. It should not be so hot that it smokes. When the oil is ready, fry the squares or diamonds of pastry until crisp and lightly golden, turning once or twice with a long skillet. They may bubble up to give them their characteristically light appearance. Cooking should take only 30-40 seconds. Remove when golden brown, turning onto the pre-prepared plate covered with kitchen roll.

Repeat the process until all of your reselekh are cooked. Sprinkle with sugar and serve. 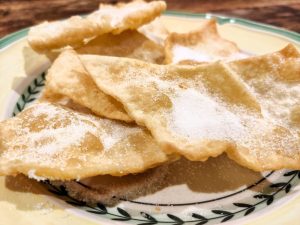 Exercise caution when frying in oil

Do not allow the hot oil to smoke.

Always use long-handled implements when frying.