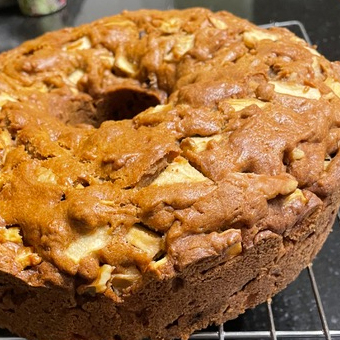 If you have landed on this recipe through our recipe blog then you will know that June 2021 in our recipe series is all about apples.

If you have found this recipe by chance, welcome to The Together Plan, a charity working to revive Jewish community life in Belarus. History, heritage and culture is high on our agenda and food is intrinsic to who we are… Do explore the rest of our website to find out more about our current projects as well as how you can get involved and support us.

Sharon Rottman’s Story
Sharon lives in Bet Shemesh, Israel. She contacted the Together Plan to seek assistance in tracing her maternal grandfather’s (Chaim Orshansky) family line from Vitebsk in what is now Belarus. Chaim went to the US in 1913 at the age of 24 on his own and never saw his parents or siblings again. He passed away in 1969.

Sharon and her sister, Joy Grossman, were thrilled that The Together Plan’s archivists traced a detailed family line of the Orshansky family in the Vitebsk area going back to the late 18th/early 19th Century until the early 20th Century.

Sharon & Joy’s family recipe
The recipe is derived from their mother. Sharon and Joy don’t know how old the recipe is, and are not sure that this exact recipe was originally their grandmother’s, who also came from Belarus. However, it is similar to other Eastern European apple cakes, including a recipe called Yablochnaya Baba in ‘Please to the Table’ by Anya von Bremzen and John Welchman. As it can be made with oil or margarine, it can be parve, and is a perfect cake for Jewish holidays. It is super easy to make and delicious.

Mix the apples with sugar and let them stand for about an hour.

Add other ingredients in the order given above.

Bake the cake in a tube baking pan (any type of round baking pan that has a hollow tube in its centre) at 350F/180C degrees for 1 hour.