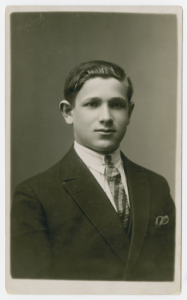 Yehuda Bielski never cooked.  Except every year on two special holidays.  Food he remembered from his life in Novogrudok, Belarus a long time ago.

The night before he would assemble on the kitchen table the ingredients he needed and he checked the refrigerator to make certain some additional items were still there.  The next day, with classical music playing on the radio, he cooked.  My job was to set the dining room table on the white tablecloth that he preferred.

Yehuda had come a long way from Belarus to his home in Manhattan near Lincoln Center.  Born in Novogrudok where his family had lived for hundreds of years, he attended the Tarbut Zionist school where lessons were taught in Hebrew.  He learned to play the violin and guitar, and became a noted ballroom dancer; he spoke Yiddish, Russian, Polish, and Hebrew.  Years later he would master English.

Poland occupied western Belarus from 1927-1939 and Yehuda was drafted into the Polish army where he was commissioned a lieutenant.  On December 1, 1939 Germany attacked Poland.  Now married and working as a school athletics coach, he was called up by the army.  Badly wounded in the ferocious fighting and with the overwhelmed Polish army in retreat, he limped his way to a Warsaw hospital. 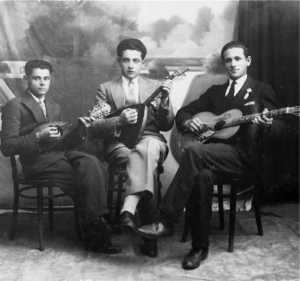 Within days the SS swept the hospital looking for Polish officers and Jews.  Barely recovered, the nuns helped him escape and he managed to return to Novogroduk, where the Russians were now in control (as a result of the Molotov-Ribbentrop Pact).  He worked in his wife’s beauty salon as his thigh wound healed.

On June 22, 1941 Germany launched a surprise blitzkrieg attack on the Soviet Union in Operation Barbarossa.  Belarus was the tip of the spear.  The Germans bombed Novogrudok.  The Wehrmacht quickly entered the town followed by the Einsatzgruppen extermination squads.  Two well-guarded ghettos were created at both ends of town surrounded by fences and barbed wire.  Violent assaults, killing and looting began immediately aided by the Germans’ enthusiastic and sadistic Lithuanian collaborators.

Yehuda survived two selections to the pre-dug massacre pits which became mass graves in the dense forest surrounding the town.  He planned an escape.  Just then a Christian friend delivered a letter from Yehuda’s older first cousin, Tuvia Bielski, who had escaped from his village to the forest with his wife, three brothers, sister, and some relatives — about 20 people.  He urged Yehuda to join him “so we can build something together.”  He needed Yehuda’s military expertise. 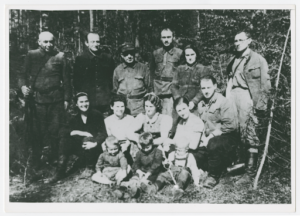 On a dark night Yehuda led his wife and eight potential fighters to the ghetto fence. They removed the

boards, cut the barbed wire and escaped into the forest.  He joined his cousins and nominated Tuvia to command the Bielski detachment which now included non-relatives.  A military wing was created: “Revenge and revenge again on the murderers” Yehuda declared.  Armed resistance was his answer.  Belorussian friends supplied them with some arms; the Russians air dropped them many more arms and ammunition.  They became known as the Bielski Partisans.

The military wing of the family partisan camp was extremely effective.  According to the Russian archives, the Bielski Partisan fighters derailed German trains with manpower and equipment, blew up tracks, rail and highway bridges, and German vehicles.  They assassinated hundreds of German soldiers and officers, members of the collaborating Belorussian auxiliary police, and local farmers who identified and murdered Jews.

In the summer of 1944 the massive Russian army was on its way to victory in Berlin.  They cleared the area of Germans.  For the Bielski Partisans the war was over.  Around 1,250 men, women and children walked out of the forest.

Tragically, Yehuda’s wife had been killed in a forest ambush.  Sometime later, he befriended Lola Hudes who had fled from Poland and had joined the Bielski Partisans, her fourth partisan group.  They married.  From Bari, Italy they sailed on a crammed, dilapidated vessel across the Mediterranean to British-occupied Palestine avoiding the Royal Navy sea patrols and blockade. 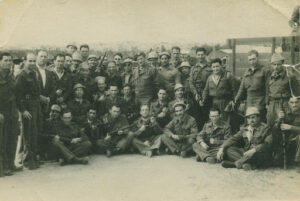 Yehuda joined the Irgun, the Revisionist underground army formed to defend Jews from Arab terrorism and pressure the British out of Palestine.  In 1948 he was commissioned a lieutenant in the IDF and fought in the War of Independence.  Israel was reborn.  Again, he was wounded in battle.  Two children were born.  Yehuda and his family immigrated to America where he became a businessman.

“Why do you only cook on these holidays?” I asked him.  “Because they celebrate the fight for freedom against tyrants and the strongest powers of the time” he explained.  Something Yehuda Bielski knew about. 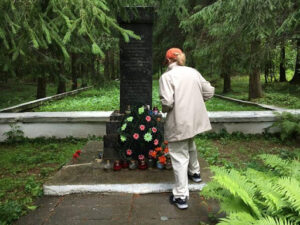 Zachor (Remember in Hebrew) The author visiting the massacre pits memorial in the forest outside Novogrudok, Belarus (2019)

Matzah (Do not use egg matzah.)

Eggs  (Ratio of matzah to eggs is usually 1:1 but can be adjusted to taste.)

Pour boiled water over matzo pieces until moist but not soggy.

In a large bowl fork beat the eggs.  Add the crumbled matzah, salt and pepper.  Mix.

Heat butter in large frying pan until slightly browned.  Add mixture and fry scrambled style.  Can be broken into smaller pieces.  Flip over and fry on other side until golden brown and crisp.

Eggs  (Ratio of eggs to potatoes is 2 eggs to 1.5 pounds potatoes)

Remove and dry potatoes on layers of paper towels. Grate potatoes against a hand held grater over a large bowl.  (Hearty, flavorful texture.)

Scoop batter patty in large spoon and drop in oil.  Do not crowd.

With spatula press down to flatten each latke.

Fry latkes until they have a rich brown color on both sides.

Keep pressing each latke down with spatula until thin and crisp.

Use a fork (not a spatula) to lift each latke from frying pan and place on  a plate lined with paper towels.  (More oil will drip down using a fork.)

Leslie Bell, Ph.D., is the daughter of Yehuda and Lola Bielski.  She is a writer

and retired adjunct professor of English at the City University of New York.