The poppy seed cake with a tale to tell 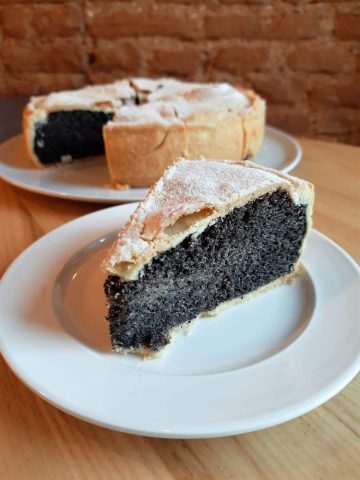 Cultural heritage through food and storytelling is an adventure. What better way to immerse yourself in geography, history, stories, tastes and smells than through food. This month our in-house foodie Michelle Rose reached out to Tamara Vershitkaya in Belarus, one of The Together Plan’s heritage coordinators, and asked her to share a story with a recipe and this is how Tamara responded:

There are three things about cooking I like a) to give new life to old recipes b) the recipe should be connected with a person or a story and c) it shouldn’t be too complicated.

Oh; have nearly forgotten one more thing which justifies all the efforts – to serve food to someone who can appreciate the first three.

Here is the story of the most favorite cake in my family.

There were a lot of emigrants from our region after WWII who took away with them not only what they could carry physically but also those things that had non-material value. When people leave the country they were born in for another place, they cherish memories about simple things like food cooked at home or family tradition to celebrate holidays, in a word – tastes, smells and flavors. 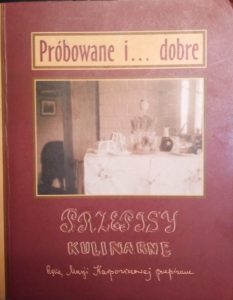 Once I got a small book entitled ‘Probowano… i dobre’ (‘Tested…and good’ to translate the title from Polish) as a present from Joanna, my Polish friend. It was a book of hand written recipes belonging to her grandmother which she came across and published just as they were. Maria Karpowiczowa (the author of the recipes and Joanna’s grandmother) was the last owner of Chombrov, the estate near Novogrudok where the family of the poet Adam Mickiewicz’s mother had lived in the 19th century. Who wouldn’t be intrigued by what there was inside the book!

Maria’s husband had been deported to a GULAG in 1940 and she survived the war with her children in Chombrov. When partisans were burning down her estate house in May 1943, she did her best to rescue some clothes and family archives from the fire, among which happened to be a notebook with her own recipes and those of her neighbours which they had collected during the war time when food was limited.

In 1945 the Karpowicz family arrived in Poland. The first years after the war, when they had to establish themselves in a new place, were not easy. Maria Karpowicz had a son and when he married, Maria wanted to make a present to her new daughter-in-law but she had insufficient money for the present.

Yet, she was that kind of a woman who always finds a way out. She bought a new notebook, rewrote the recipes from her old recipe book and added some from her memory which had been passed from generation to generation and which had been cultivated in the family.

A poppy seed Chombrov cake was definitely the one the Karpowicz Family used to cook before the war and maybe even in the 19th century, in the times of Adam Mickiewicz. Mickiewicz, who was born in Zavosse in the Polish-Lithuania Governorate in the Russian Empire (today Belarus), valued local cuisine so much that while he lived in Paris he would eat only ‘Polish and Jewish’ food authentic to Nowogrodek. Refusing to eat French food he would only eat traditional Lithuanian fare and would even wear outdated traditional Lithuanian clothes – nothing French at all!! In his last years he was lucky to find a Jewish woman who would come to his house in Paris to cook ‘a pike a la Jewish recipe’ for him on Christmas.

So I share with you here, a tradition from the Karpowicz family, or indeed the tradition from Chombrov, since the cake is named after the family estate. Enjoy!

Put the dough into the freezer for an hour or so. In the original recipe the time duration was a couple of hours in the cold because they didn’t have fridges then.

Mix the ground poppy seeds with the icing sugar (but keep a couple of spoonful of the icing sugar to spread on the top of the cake when it is baked). Add a pack of vanilla (1 g).

You can use ground almonds nuts instead of poppy seeds but, it is important to make sure that there is definitely 50g more icing sugar than the nuts ie 250g nuts or poppy seeds and 350g icing sugar).

Beat the egg whites into a firm foam and slowly add to the poppy seed (or nuts) and icing sugar mixture. 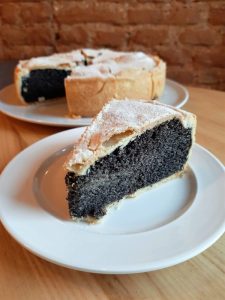 Take the dough out of the fridge and divide into two parts in the proportion 1:10. Leave 1/10 aside. Roll out the dough as thin as you can in the shape of your baking dish. Put a sheet of dough into the cold baking dish coated with vegetable oil so that it covers the walls and the bottom. Accurately put the mixture on top. Note: the baking dish must be non-removable – ie a solid baking dish.

Roll out the rest of the dough to make a cover. Cover the mixture in the baking dish and pinch the edges of the lower and upper layers of the dough.

Put it into the oven at 180 degrees and bake for about one hour.

Remove from the oven and out of the dish by turning it upside down on a plate and then quickly turn back on the other plate, spread icing sugar on top and voilà!

Poppy seed soufflé contrasting a thin crispy, buttery-flavored crust will make your tongue and your whole being happy.

I gave a master class on how to cook it to the owner of the recently opened café in Novogrudok ‘Kaviarnia’ so now everybody who comes to visit our town can enjoy it.