We made history together

An ambitious, unique and dynamic Holocaust education programme created by The Together Plan, has just completed its inaugural year.

The programme, Making History Together, designed specifically for young people (aged 12-16) in the UK and in Belarus, focuses on the Holocaust in the east and what happened to the Jews in the Soviet Union and specifically Belarus during the Second World War (or the Great Patriotic War as it is called in the former Soviet Union). 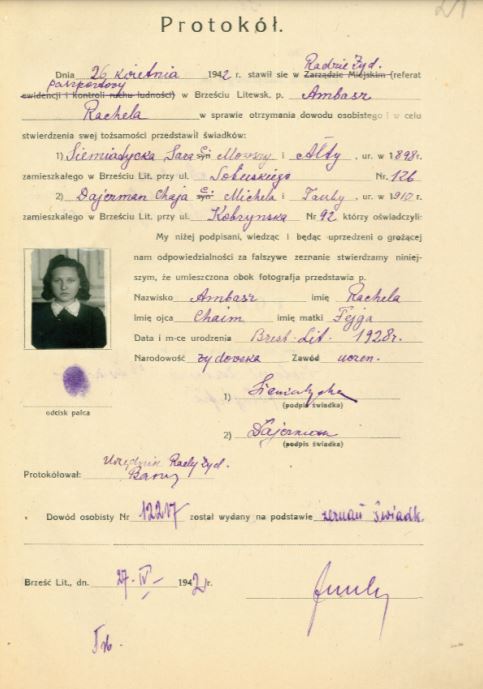 It is believed that of the six million Jews who were murdered by the Nazi’s during the Holocaust, 2.7 million were in the Soviet Union. This is Holocaust history most know little about and it is of vital importance in understanding the Holocaust as a whole. For the participants in the UK, as a first foray into Holocaust history, beginning their journey in the east will give them a much more in-depth understanding when they come to learn about the concentration camps and ghettos in western Europe. For the UK parents, this was eye-opening, with many saying that this was all new information for them. Our UK participants received monthly materials by post followed by an online 90-minute session. In the final pack, each participant received a copy of a unique never-before-seen document, real hidden history, protocols relating to Jewish children who perished in Brest. These are documents that the Nazis made the Jews carry, and which were their transfer passes into the ghetto. Each protocol is written in Polish (Brest was a part of Poland during the inter-war years) and shows the name of the child, a photograph, a fingerprint, their address, their parent’s names and the names of two witnesses who were needed in order to register the protocol.

In Belarus, the group of students participating in the parallel programme are not Jewish. Their course was in-person, featuring invited guest speakers, including a survivor of the Minsk Ghetto. They travelled to important sites such as Maly Trostenets – the site of a death camp on the outskirts of Minsk, the Museum of Jewish Resistance in Novogroduk, and Porechye, a village south of Minsk, where 40 Jewish children (escapees from the Minsk Ghetto) were hidden by the entire village. The students visited the village with Frida Reizman, who was one of the children who was hidden and is today the only one still alive. Watch the film about the visit to Porechye here.

With no official Holocaust education programme in Belarus, this was, for most, the first opportunity that the Minsk group had had to learn about this hidden history of their country and it drew them in. At the end of their programme, the College Principal planted tree saplings with veterans and ghetto survivors in honour of the partisans who helped Jews to escape the ghetto. The park where the trees were planted, is on the territory of the old Jewish cemetery which was inside the Minsk Ghetto. The students are studying vocational skills such as carpentry and metalwork and they have said that they want to make a park bench in metal in honour of a ghetto survivor. Their hope is that in time, many such benches will become a reality around the park. Click here to find out how you can help this initiative become a reality.

So what next? Over the coming months, the project team headed by Leo Levine and Debra Brunner will be working on the creation and design of two interactive travelling exhibitions (in English and Russian), so that organisations, schools, colleges, universities, museums and communities can learn about this hidden history and engage in dialogue around the themes that the course focuses on; the impact of communism and the Holocaust on the erosion of Jewish traditional life in the Soviet Union, identity, power and leadership, antisemitism, repair of the world and how we move forwards with the knowledge we now have. The exhibitions will be multidimensional using QR code technology to access films and materials that were used during the programme giving real depth of exploration of the theme.

The course will run again in 2022. In Belarus, the programme will be in-person, and the English language version will be run online. This means that English speakers, aged 12-13, and within a five hour time of the UK can participate making the programme accessible to a much wider geographic audience. To learn more about the programme and/or to sign up for 2022 please click here.

On 29th August, The Together Plan will be participating in the Maccabi Fun Run at StoneX Stadium in north London. Runners and walkers will be striding out for their causes on the day, at the stadium or in their own safe spaces (wherever they are in the world). In Belarus, a team of runners will be participating in a challenge there as their participation and they are asking people to sponsor them to help raise money for the bench to be made by the Making History Students at the college in Minsk in the name of a Minsk Ghetto survivor. If the target can be reached – the bench will be installed in the park next to the college, which was once the Jewish cemetery.