Words of a Slonim survivor – the Holocaust in Belarus 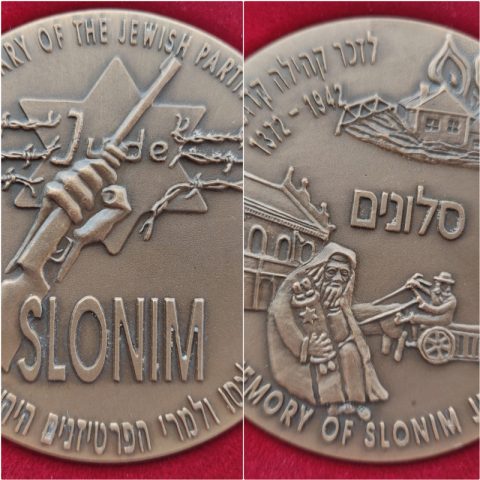 Originally written in Yiddish by Holocaust survivor Nachum Alpert in 1947 within the constraining guidelines of the Stalinist regime, this book ‘The Destruction of Slonim Jewry’ was expanded and enriched by the author when he left the Soviet Union over 30 years later. It relates the final years (September 1939-September 1942) of his native Slonim, Byelorussia. Few Jews who survived in the Soviet Union could speak or safely document their stories and so very little is known or understood about the terrifying atrocities inflicted there. Very little is understood about Belarus during the Holocaust. ‘Belarus was the centre of confrontation between Nazi Germany and the Soviet Union. After the German invasion of June 1941, its inhabitants observed, if they survived, the escalation of both German and Soviet violence. Their homeland was a German zone of occupation and a once and future Soviet republic. Its cities were battlefields of armies in advance and retreat, its towns centres of Jewish settlement destroyed by the Holocaust. Its fields became German prisoner-of-war camps, where Soviet soldiers starved in the tens and hundreds of thousands. In its forests, Soviet partisans and German policemen and Waffen-SS conducted ferocious partisan warfare. The country as a whole was the site of a symbolic competition between Hitler and Stalin, represented not only by soldiers behind the lines, partisans in the forests, and policemen over pits but by propagandists in Berlin and Moscow and Minsk, the republic’s capital city.’ (Timothy Snyder, Bloodlands Europe Between Hitler and Stalin). 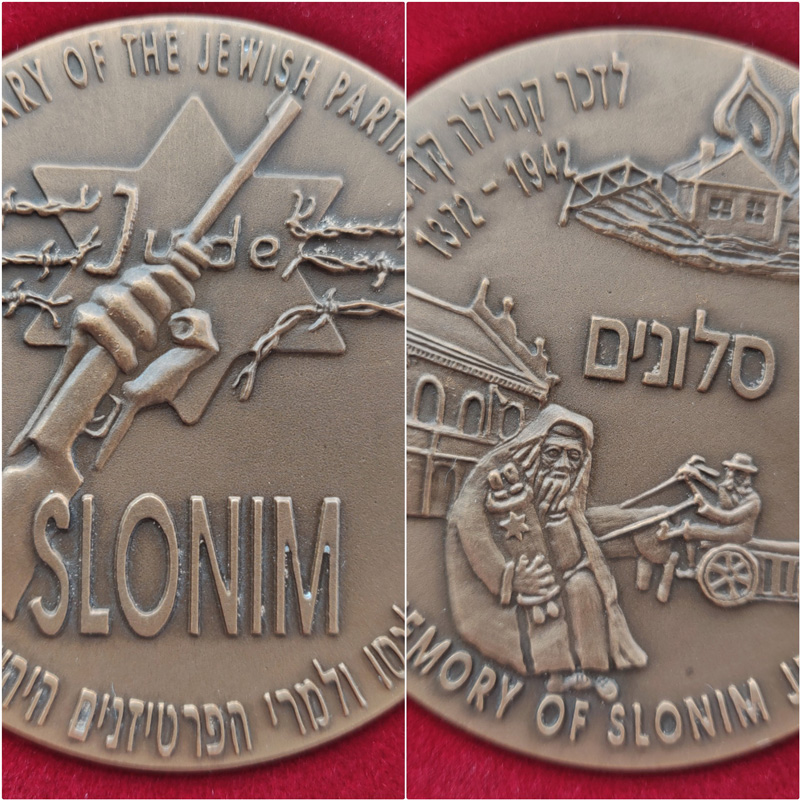 An excerpt from The Destruction of Slonim Jewry by Nachum Alpert

Through the raging waves that inundated Slonim, there soon surfaced an Ostkommandant who moved into Rutkowski’s building.  Almost immediately the priest from Zamoshche was at his side, along with local Poles who, in September 1939, had swallowed the bitter pill of having their independence taken from them.  With the Soviet defeat came the hope of regaining some of their power, even if it meant helping the Germans subjugate Poland.  Out of these power-hungry Poles, a sort of fictitious city council was formed, as well as a police force., They also made a gesture toward the Jews by inviting Hertz Itzkowitz, an attorney, and Moshe Jakimowsky, a former merchant, to join the council.

Despite the fact that the Germans and the Poles had been blood enemies “from time immemorial,” there now arose between them a mutual understanding, a brotherhood of murderers who got drunk together and ‘sang together’ on the basis of anti-Semitism and anti-Communism, a traitorous coupling of the Hitler swastika and the white Polish eagle.

Imitating the Poles, a Jewish ‘initiating group’ – Wolfe Berman, Zalman Ivansky and Moshe Jakimowsky – set up a Jewish Assistance Committee, a kehillah-type organisation that took over the empty building that had formerly belonged to the manufacturer Jezersky on Bernardino Street. The Soviets had deported Jezersky and his family to Siberia.

The Jews in Slonim were particularly distressed by the decree ordering them to wear the yellow patch on their chest and on their back.  With their usual precision, the Germans specified the size of the patch and how it must be sewn onto the clothing. Jewish backs had known this shame in Roman ghettos. The Nazis only emulated the Roman satraps.

Because the barbering trade had been in Jewish hands for generations, and the Hitlerites would therefore have to lay bare their swinish throats to Jewish razors, they ordered the Jewish barbers to teach their trade to “pure Aryans.”

The purpose of all these decrees was to demean the Jews, make them feel they had no right to live, to dehumanize them so that it would be easier to destroy them.  They were intended to create a chasm between Jews and “Aryans,” to place Jews outside the law, to make them easy prey to the bully and the cut-throat.

There were also general orders issued to the entire population. Jews and non-Jews alike: radios must be turned in to the authorities, all marriages performed under Soviet law were annulled and had to be performed all over again by priest or rabbi.  In the brief period of Soviet rule, the majority of Jews had become acclimated to the Soviet atmosphere, in which they had equal civil rights, something they had not achieved during the 21 years of the Polish fascist regime.  The “ethnic Poles” and the wealthier farmers in the Byelorussian villages had therefore looked enviously upon the Jews as more privileged citizens.  Public displays of anti-Semitism had been strictly forbidden, so the Jew-hatred went underground.  Now, with the Nazis in control, many of the Gentile hoodlums freely washed their hands in Jewish blood.  Poles with whom Jews had lived on friendly terms for years now took off their masks and became partners with the Nazis in their dirty work.

In order to make it easier to destroy the 25,000 Jews of Slonim, the Germans began concentrating them in one compact mass, expelling them from streets on the outskirts of the city, which were populated mostly by non-Jews, and forcing them into the neighbourhoods along the riverbank.  Jews who owned workshops and businesses that were important to the Germans were, for the time being, not touched.

Meanwhile, Schwartz and his minions had a field day. The Jewish cemetery was “busy” day and night. Graves were being dug constantly. The police would merely drive their victims to the edge of the grave and shoot them.  Especially “active” was a young Pole from Albertin named Kishko, who was a fanatical “sharpshooter,” particularly if his targets were Jews, Red Army men or “rebellious” Byelorussians.

These “watchdogs’’ were busy sniffing out left-wingers, radical intellectuals, people “from the east” who had not managed to escape, Jews who had worked for the Soviets as managers of small enterprises, artels, etc.  In many instances, under cover of their witch-hunt, the police took advantage of the situation to settle personal scores. They had a blacklist of Jewish attorneys, Jewish teachers, Jewish intellectuals.  Prominent on that list were Dr Kowarski, a beloved paediatrician, and Leybl Bliacher, with whom Chmeliewski had a personal grudge to settle for his testimony to the N.K.V.D.  When they came for him, Bliacher resisted the police with an axe, but they were all carrying guns.  They locked him up and Schwartz himself “interrogated” him, then shot him – along with Dr Grodzenski – at the edge of a grave in the Jewish cemetery.

Itche Jaffe, a Communist, had been hiding in Ruzany Street in the home of his wife’s parents. The police, not finding him there, took his youngest brother, Israel, held him prisoner for a while, then led him out to the cemetery in one of the groups to be shot.  Paula Sirinsky (Dr. Zirinsky’s daughter), was known among the young people of Slonim for her beauty, her unpretentiousness and her talent as a ballet dancer.  During the Soviet period she had often danced at the municipal theatre. The police arrested her and her father and dragged them along Panesve Street to the outskirts of town. Along the entire way Paula called out anti-fascist slogans to the people on the street. Her captors tortured her in the presence of her father and, unable to witness her agony any longer, Dr. Zirinsky took his own life.

Two German soldiers suddenly ‘disappeared.’’  After a 24-hour search that failed to turn them up, the occupation authorities accused the Jews of having murdered the two missing men and held the Jews collectively responsible for the “crime.’’ The penalty: for each German soldier a hundred Jews would have to pay with their lives.  On the third day, from eleven in the morning until evening, the fascists rounded up the required 200 Jews and locked them up in the Polish Teachers Seminary on Skrobive Street. The Jewish population was overwhelmed by helplessness and despair. The blade lay on 200 young Jewish throats and only a miracle could save them.

The prisoners were being herded out to the cemetery under a hail of blows and insults. But just at that moment, from a Polish house on Ruzany Street, the two drunken ‘’heroes’’ suddenly emerged in the company of two prostitutes who were just as drunk. After a few unspoken signals between the two ‘’pure Aryans’’ and their officers, a new volley of blows rained down upon the 200 captives, but this time they were permitted to ‘’escape.’’

The Destruction of Slonim Jewry is one of the many books in The Together Plan’s library. The library is focused on the story of the Jews of Eastern Europe and the former Soviet Union. If you would like to have access to our library and support the work of the charity why not sign up and join our Friends Club.