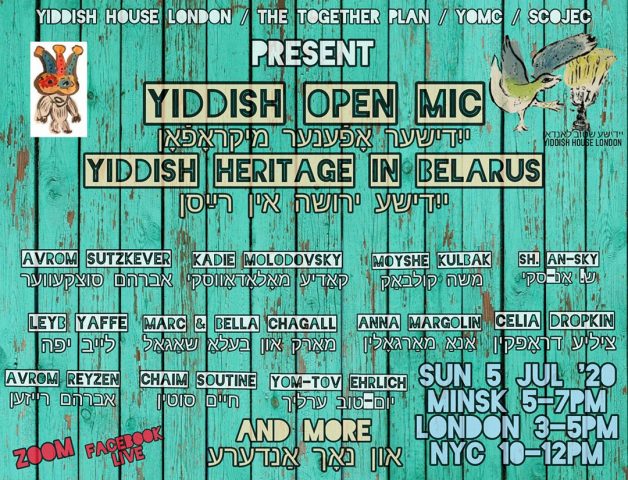 On the 5th July, The Yiddish Open Mic Café in collaboration with Yiddish House London and the Scottish Council of Jewish Communities held their 28th Yiddish Open Mic Cafe – celebrating Yiddish heritage in Belarus. The online event brought an audience of over 100 people together from all over the world. 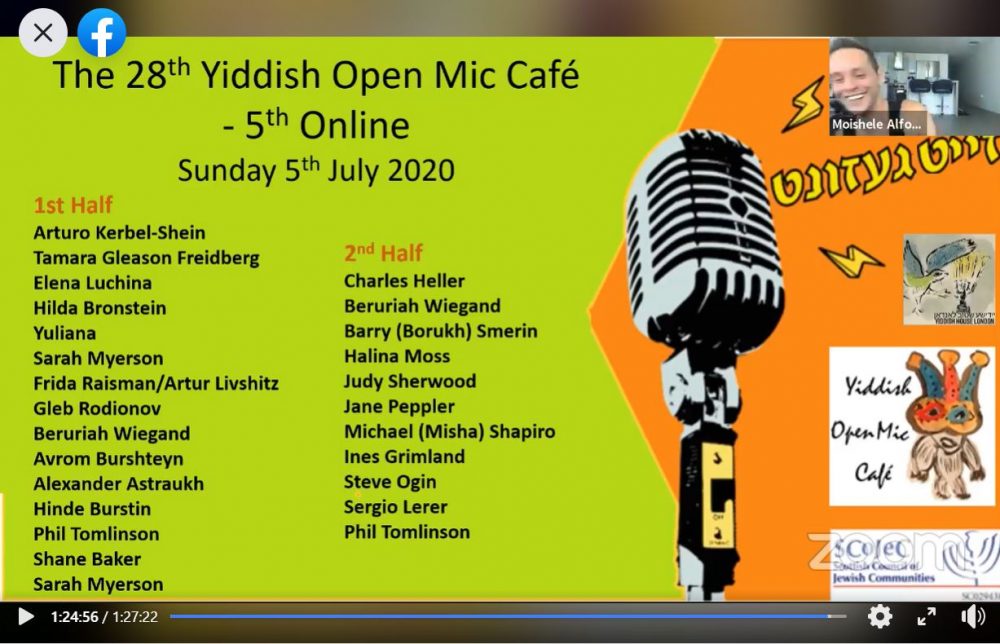 Delivered in Yiddish, with English and Russian on the screen, the event was accessible, fascinating and hugely enjoyable. The introduction was delivered by Yiddish musical artist Hilda Bronstein, who explained that ‘in Contrast to better known Jewish organisations, The Together Plan does more than provide humanitarian relief. It attempts to create deep personal relationships that are both socially and Jewishly meaningful so that Jewish communities can better organise themselves vis-a-vis the values and interests of the local Jewish population.’

The programme was a superb mix of Yiddish past and present. Special guests from Belarus included Minsk Ghetto survivor Frida Reizman, speaking in Yiddish about her life in the ghetto and the important work that The Together Plan is doing for Jewish Belarus. A powerful highlight was her spontaneous rendition of Tumbalalaika from her childhood. Also from Belarus, we met with Alexander Astraukh – the author of the Yiddish-Belarusian Dictionary who also regaled us with Yiddish song. We heard from 17-year-old Ulyana Babko, a member of the Polotsk Jewish community in northern Belarus, who is today researching the story of the Jews of Polotsk as part of the Together Plan’s Jewish Cultural Heritage Trail. Guests from around the world gave us an insight into the Yiddish influencers of days gone by, explaining who these people were and how they are still relevant in today’s Yiddish circles, among writers, academics, historians and heritage aficionados.

We were transported to the Belarus of yesterday, the world of:

On a Rainy Day
Translated by Hinde Ena Burstin

On a really rainy day
When the whole world cries
Sing of sun shining your way
Sing of wide, blue skies.

On grey days full of gloom
When hearts fill with pain
Sing of trees in bloom
And fields growing green again.

Shalom Ansky, the Yiddish folklorist, socialist, actor and writer best known for his play “The Dybbuk” or “Between Two Worlds,” written in 1914 (watch a clip here from the 1937 film version) Ansky was also famous for his song “Di Shuve” the hymn of the Bund. The Yidisher Arbeter Bund in Lite Polyn un Rusland (the General Union of Workers in Lithuania, Poland and Russia) founded in 1897 in Vilna, often faced discrimination in non-Jewish Marxist groups. The movement was very active in many cities (which are today a part of Belarus). The Bund realised the importance of Yiddish culture to the Jewish identity.

The event, which was free to attend, was recorded and can be watched here. There is a link for those who wanted to make a donation to The Together Plan and the fundraising page is still open. Donations can be made here and funds raised are being used for Yiddish research and education around the Jewish Cultural Heritage trail project. So far almost £400 has been raised and we are hugely grateful for this support.

If you would like to hear more about Yiddish in Belarus, join us on August 2nd at Zoom in to Zoymen 2020 where Tamara Gleason Freidberg and Arturo Kerbel-Shine of Yiddish House London, will be joined by Gleb Rodionov (Minsk) presenting a talk entitled “ Yiddish: The Central Element of Judaism in Belarus”.

The talk aims to reveal the intimate relationship that exists between the Yiddish language and the overall history of Judaism in Belarus. Yiddish was the most widely spoken language by Jews in Belarus throughout the centuries, making it imperative to understand the Jewish experience in the country.