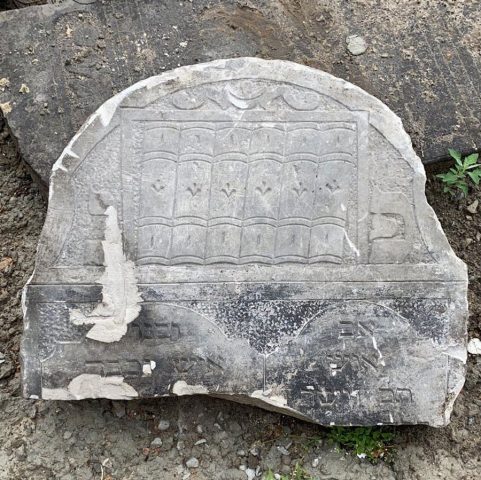 The work that began in July to photograph, weigh and measure the headstones from the Brest-Litovsk Jewish cemetery has continued at a pace. Now in the third week since the team began work in the warehouse in Brest, so far 920 pieces have now been photographed for the digital catalogue (some complete matzevot and some broken pieces). Each photograph will be used to read as much as possible from each of the headstones and the reading and translation work will commence shortly.

The work to physically lift each piece has been an extraordinary effort. Students from the Brest Technical University have been volunteering their time proving that this is a project that brings members of the Brest community together – both Jewish and non-Jewish. This engagement is enabling people to learn more about the lost Brest-Litovsk Jewish cemetery and its tragic story. Little is known about the cemetery since there is no plaque or signage to say that this place, now a sports stadium, was once a very significant Jewish cemetery.

As the work progresses, more people from around the world, who have a connection to Jewish Brest, are starting to hear about this important heritage project. The many Briskers – around the world contributed to the book The Brest-Liovsk Encyclopedia – a collection of memoirs, recollections, photos, memorabilia, political and institutional:

This book was written by Brest survivors and former residents who contributed their memories of their hometown as a record for future generations, and as a testament and loving tribute to the innocent Victims of the Shoah. It is a must read for the researchers of the town and descendants of ‘Briskers’.

Sam Webb at the age of 13, left Brest in1938 with his immediate family and journeyed across the globe to find freedom and safety in Australia. Apart from one relative who they were able to help to escape, the family that was left behind all perished with the arrival of the Nazis in 1941. Sam, filled with terrible childhood memories of antisemitism and oppression said he would never return to Brest, but in 2019 he did – you can watch the short film here, featured on Belarus television.

During the winter lockdown in January 2021, we recorded a film with Sam – where he talks about growing up as a Jewish child in Brest-Litovsk. Watch the film here.

More rise to the surface

The Felix Warburg Colony in Brest was a new housing estate that was established in 1923 by the American Joint Distribution Committee built for homeless Jewish refugees after World War One. During World War Two, these houses were used as a prisoner of war camp, first to accommodate Soviet Soldiers captured by the Nazis, and then by Nazis under the watch of the Soviet Army who took back control of the area. Many of the matzevot from the Brest-Litovsk Jewish Cemetery were taken from the cemetery and used to pave the area around these houses during the war. Brest author and illustrator Vladimir Gubenko details this in his drawings which can be seen here and in his book ‘Brest of My Memory 30-60s of the XX Century’. The houses of the Felix Warbourg Colony sadly fell into disrepair and were condemned and over the last 10 years, they were demolished. New buildings have been appearing at this site.

At the beginning of August – a call came into our team, to say that more matzevot had been discovered, in the area that had been the Felix Warbourg Colony. Approximately 25 matzevot were found and the municipality was quick to collect and deliver them to the warehouse where our team were working so that they could be photographed, weighed and measured. How many more headstones are still yet to be discovered – who knows, but where they are we will do everything we can to bring them to the project.

To read the story of the Brest-Litovsk Jewish cemetery click here.